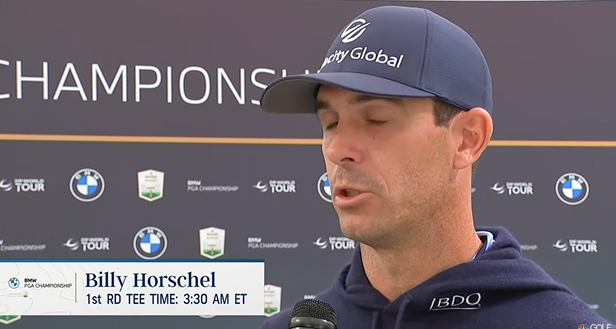 LIV presence at BMW PGA Championship ‘a slap in the face’

Hello. I’m Anna Jackson, and this is your golf central update. Well, no doubt a side relief this morning for this year’s International Presidents Cup cast in Trevor Illman as he announced the six Wild Cup picks that will round out his twelve-man team headed to Quail Hollow in just a few weeks’ time. Some new faces on the roster. Five rookies have made his pick lineup, including Taylor Pendrith and Christian Bizadenhal, DJ Torwinners and Cam Davis khlee and Sebastian Munoz alongside former Players champion Steel Kim, the only pick to have any President’s Cup experience back in 2017. They’ll be joining those six automatic qualifiers and major champions to Deku Matthew and Adam Scott, south Korean Sunjay I’m and breakthrough star Tom Kim alongside Canada’s Corey Connors and Chile’s Miko Pereira rounding out the twelve. Meanwhile, over at Wentworth, one of the major stories developing this week is the underlying tension between the reunion of the Live and PGA Tour players. So for more on the deepening divide in the professional game, we send it out to our reporter on the ground, Rex Hoggard.

The BMW PGA Championship is one of the DP World Tours’ strongest fields of the year, and that’s certainly the case this week with the likes of Roy McElroy and Matthew Fitzpatrick. But it’s the Lib Players who showed up at Wentworth that promised to make this an eventful week both on and off the golf course.

It’s tough being asked this and been trying to think about it now for the last week when I realized there was going to be a lot of them here, a lot of the players. And then I’ve also tried to take in a lot of the members, the regular members of this tour, and see where they stand. And there are some guys that are fine with it, there are some guys that are in the middle, and there are some guys that believe they shouldn’t be here. And they’ve taken a really hard stance on it. For me, as much as I get along with Ian Poulter, Lee Westwood, Bern Bees Burger, and these guys, and I know they’re European Tour members and they support the tour throughout the years, I believe that they shouldn’t be here. I believe it’s a slap in the face of the regular members, of the guys that are actually supporting this tour going forward. These little guys, when they sign a contract, they factored in what they got paid at the very beginning when they signed that contract, that they may not be able to play the DP World Tour or the PGA Tour going forward.

So that’s why I think some of their values were or they increased their values or asked for a bigger number, and that’s when they got those numbers. So it’s a slap in the face to realize that some of these guys depend on how well they play may cost somebody a chance of winning this title and taking home a really nice price check. And it’s seen it’s the biggest person on the DP World Tour. That’s a full field. I think as I said, it’s a slap in the face of the regular membership of this Tour. I can’t have as hard of a stance as I would like because I’ve only been a member of this Tour for the last four or five years, and I play over four or six times a year, and this is a PGA Tour. I would be a little bit more strong, in my words, but I’m taking my words are a little bit as what my feelings are, but also taking in what the regular members out here feel.

What’s been your interaction this week with the Lift Players?

Yeah, I’ve seen Bern Veestberger. I’ve seen and had a conversation with him. He’s been a good buddy, and I’m happy for him. Richard Bland, he’s 49 years old. I don’t fault the guy for doing what he did to go to Live, and I have a great relationship with him. And I’ve talked to Ian Lee yesterday, and even when I talked in, we were talking about this week and about the guys here, and we’re having a little banter back and forth about comments I’ve made and comments leaves made over the last few months. But at that point, I hadn’t made a decision of where I was going to stand on it because the DP World Tour isn’t as strong as the PGA Tour, and the DP World Tour is trying to be built back up with a strategic alliance and to try and do it on their own as well. But at the same time, as I said, I think it’s a slap in the face that these guys are here, but my interaction is the same. I don’t fault those guys for anything, and I’m going to want to have a conversation with them. It’s funny because we can’t really talk about golf because I don’t care about what they do on that Tour and what they do.

I did say I heard that Lee had faded a wet shot on his last hole to lose the Lift Tour event, so I gave him a little elbow on that one, a little bit little ribbon on that one, but it’s changed a little bit what we talk about. But I still have a great relationship for them, with them, and I don’t fault them for making the decisions they made. I just think that they should really just not be here and stay away and enjoy counting all those millions of dollars that they got.

There’s a difference between the relationship between live golf and the PJ Tour and live golf and European Tour, right? PJ Tour can afford to let go of some players saying it that way and still survive and have some really big superstars. European Tour, unfortunately, is not in that position. Right. There are some big stars that dedicated their lives and their big names in the history of DPWorld Tour that is now in Live. And I don’t necessarily think you should completely ban them because they’ve dedicated their lives to the store and the Rider Cup, even though the PG Two might have been bigger. Right. Especially Dread league related to this event. They’ve come to the BMW Championship, and many years in a row, some of them have won it. So I understand not being full support, but I don’t think they should be completely banned. Right. I can give a direct example. No matter what league Sergio is playing on, it makes an impact. With Sergio playing in Spain, it makes an impact. There’s a difference when Sergio plays and he doesn’t play. And that could be the difference between somebody new picking up a golf club or not, who might be a future superstar.

There is a difference. Right. So in my mind, letting them play might not be the worst thing, and I kind of support them playing some of those events.

And there are other players in this week’s field who haven’t supported the European Tour. How do you feel about those players being on the field?

That’s where I’m not a judgmental person, but I reserve some judgment in that sense. I’m not entirely happy that they’re here. They’ve never shown any interest in the DP world tour. I keep saying European tour. They’re not shown any interest in this event. And the only reason they’re here is that they need more ranking points for hopefully qualifying for events for next year. So they’re taking away a spot from somebody who’s fought really hard to earn it. And unfortunately, the first one is a really good friend of mine, and that’s probably why I’m a little bit more personally invested in that sense. Somebody who’s been playing really hard his whole life, who’s been a DP World, remembers many times, lost his car and fought his way back again, and can’t get into one of the biggest events, which could be career-changing because they decided to play.

What will your interaction be like this week between yourself and the Lib players?

Well, as I said, there is a difference, but it won’t change at all. Right. It’s not my place to I’m not going to be angry at anybody or reserve any animosity towards anybody just because they were allowed to play. Right. If they are allowed and they came, it’s because they can, and it’s as simple as that. So, inevitably, some of us are going to be paired with them, hopefully in the weekend and hopefully with a chance to win. So we’re here to play golf. At the end of the day, we are golfers. The bottom line, is we play this sport because we love it, and that’s it. It’s not going to change. Plus, there are some of them that were great friends of mine, right? I mean, Sergeant and I are really close, especially after the moments, we shared in that last ride, a cup. So that’s not going to change with anybody now.

Most of the live golf players in this week’s field are trying to keep a low profile and have declined all media interviews. I did have an opportunity to catch up with Patrick Reed today on the golf course and ask him his expectations, and he said he’s been coming over and playing European Tour events for a long time. And as an American Rider Cup star, he said he’s used to hearing things from the crowd. But he expects this week to be no different than any other week playing competitive golf. Anna, good stuff.

Thanks. For example, that is it from us. We’re just two weeks to go now until the President’s Cup at Quails Hollow. Tomorrow is all about Team USA. When Captain Davis Love Ice makes his pick We’ve got full coverage tomorrow starting at noon on Golf Today. Have a great evening.