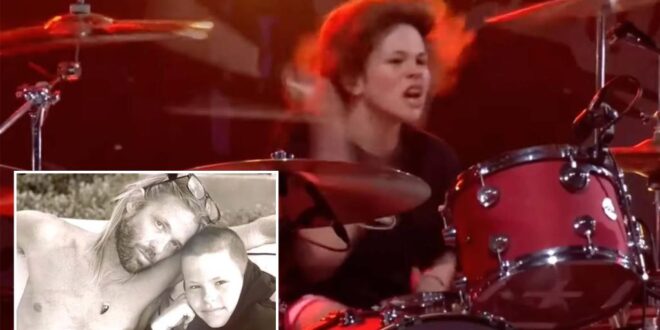 To him, dad was not so ordinary a hero.

Images of father and son were displayed on screens for the stadium to see as the song began, revealing the teen behind the drumset.

Musicians from around the world gathered in support of Hawkins, with various artists playing songs from Foo Fighters’ vast catalog.

The tribute opened with former Oasis frontman Liam Gallagher performing his band’s “Rock ‘n’ Roll Star” and “Live Forever,” backed by the Foo Fighters with Grohl on drums, Pat Smear and Chris Shiflett on guitar and Nate Mendel on bass.

Later, Grohl was seen breaking into tears as the singer performed “Times Like These.”

Hawkins died in Bogota, Colombia, on March 25 due to a cardiovascular collapse at the age of 50.