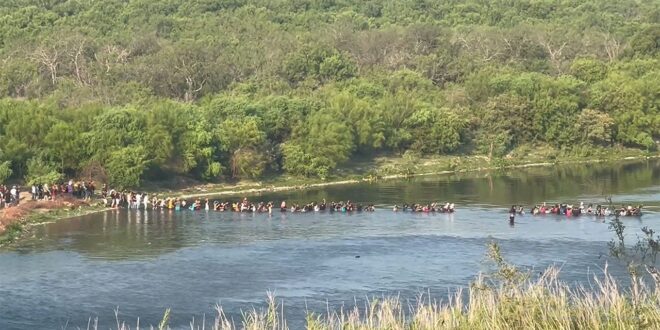 The deaths of at least nine migrants in the Rio Grande River as they tried to cross the U.S.-Mexico border marks the latest tragedy that highlights the risks facing those seeking to illegally enter the United States.

Customs and Border Protection (CBP) said Saturday that the death toll in the incident had risen to nine. The bodies of eight migrants were found Thursday, after Border Patrol in Del Rio Sector responded to reports of a large group of people.

An additional 53 migrants were apprehended, 37 of whom were rescued as they tried to cross the river.

Migrants stream across the Texas border on July 13. Eight migrants were found dead Thursday and another 53 were taken into custody as they tried crossing the Rio Grande into Texas, authorities said.
(Fox News)

The Del Rio Sector has seen an increase in migrant traffic in recent years and has become a major border crossing point. It was the site of the Haitian migrant crisis a year ago, where over 10,000 Haitians crossed the river and camped under the International Bridge. Agents have discovered bodies of more than 200 migrants in the sector this fiscal year, CBP said last month.

The border as a whole has seen a massive surge in migrant encounters, with Border Patrol making more than 200,000 encounters a month. That’s in addition to the more than 500,000 who have slipped past agents this fiscal year.

But as the large number of migrants make their way to the border, often to try and enter illegally between ports of entry, migrants put themselves at great risk — by putting themselves into the hands of transnational criminal organizations to get them into the U.S., and by traversing extreme heat, aggressive waters and dangerous terrain on their journey north.

The dangers of the border were highlighted in June with the deaths of 53 migrants in a tractor-trailer in Texas. The migrants were found in the abandoned vehicle, which authorities believe was part of a human smuggling operation.

Last month, two children died in separate drowning incidents as they tried to cross the Rio Grande. One, a five-year-old Guatemalan girl, was swept out of her mothers arms by the raging waters, the New York Post reported.

The New York Times reported that the fire chief in Eagle Pass said this week that drownings have become an everyday occurrence in that section of the border.

Last week, Border Patrol agents rescued a four-month-old and 18-month-old who had been abandoned in the sweltering heat of the Arizona desert — an incident that officials used to highlight the cruelty and “heartlessness” of human smugglers.

Republicans have accused the Biden administration of encouraging more migration by ending Trump-era border protections and allowing more migrants to be processed and released into the U.S. The Biden administration has ended the Migrant Protection Protocols (MPP) — which forced migrants to return to Mexico during their immigration hearings, rather than be released into the U.S. The administration also stopped border wall construction, sought to end expulsions under the Title 42 public health order, and narrowed Immigration and Customs Enforcement (ICE) priorities.

“Biden’s immigration policies have emboldened human smugglers, led to record levels of migrant deaths, and endangered the safety of law enforcement and Border Patrol,” Rep. Tony Gonzales, R-Texas, said in a tweet this week before the latest deaths were announced. “No one stands to gain more from this chaos than the cartels.”

The Biden administration, meanwhile, has faulted the Trump administration for closing off legal asylum pathways while in office, and has said it is trying to restore those pathways — while finding ways for migrants to claim asylum without putting themselves into the hands of smugglers and making a dangerous journey north.

The administration has launched a human smuggling and trafficking task force, and recently launched an anti-smuggling operation that it said resulted in more than 3,000 arrests. Meanwhile, it has focused its efforts on targeting what it calls “root causes” of migration — including violence, corruption and poverty in Central America.

The administration has touted its efforts to mobilize humanitarian support — including investing hundreds of millions of dollars — to address humanitarian needs in the Northern Triangle. Vice President Kamala Harris has pushed a “Call to Action” which has led to over $3 billion in investment from the private sector in the region.

“When I began work on the root causes of migration from northern Central America, I approached the task with a few basic principles: one, my belief — I think our shared belief — that people don’t want to leave home,” Harris said in June at the Summit of the Americas. “And when they do, it is usually for one of two reasons: They are fleeing harm, or they cannot address the basic needs of themselves or their family.”

The administration has also set up migration resource centers to provide referrals to those seeking lawful asylum pathways, expanded refugee processing in the region and increased temporary work visas, as well as restarting the Central American Minors program (CAM).

In June, at the Los Angeles-based Summit, President Biden announced a migration agreement with other Western Hemisphere leaders that he said was “transforming” the approach to the issue.

“We know that safe, orderly and legal migration is good for all our economies. But we need to halt the dangerous and unlawful ways people are migrating and the dangerous ways,” he said.

With that pact came more commitments for temporary visas and humanitarian funding for the region via the U.S. Agency for International Development. Mexico also announced that it is expanding its migration programs and launching a new temporary labor program.

But, nearly two years into the Biden administration, the migrant crisis has dramatically worsened since Biden took office, with encounters already past the 2 million mark for this fiscal year, compared to the more than 1.7 million last fiscal year and 646,822 in FY 2020.

The administration has stressed that their approach does not guarantee that results will occur “overnight.”

“But none of this is going to be just turning on a switch. It requires focus, it requires intention, it requires an investment over a period of time, which means, in the short point, is that you’re not going to see the benefit of it overnight — because the problems didn’t occur overnight,” Harris said in February.

Previous Miley Cyrus and her dad are upset with each other, claims source
Next Taylor Hawkins’ son Oliver Shane plays drums during Foo Fighters tribute