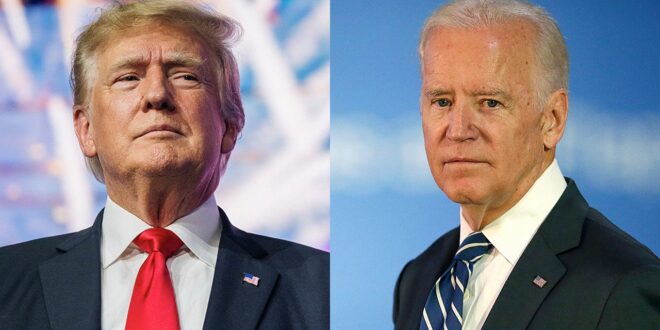 Nearly two months out from the 2022 midterm elections, President Biden has endorsed only three Democrats running for House seats and one candidate for governor, well behind former President Donald Trump’s support for dozens of Republicans in 2018.

Biden’s early midterm message has been that voters must reject “MAGA Republicans” in the November election, or risk losing equality and democracy in the nation. During his speech in Philadelphia Thursday, Biden suggested that voters should fear the GOP would remove rights if they win in November, since “MAGA forces are determined to take this country backwards.”

The president did not mention legislative accomplishments or the recent student loan handout in his Thursday speech, and mostly avoided policies he would push for if Democrats maintain control of the House after November.

Biden has voiced support or campaigned with many Democrats, but his official endorsements could show a hesitance among Democrats to avoid being tied to the president’s low approval rating.

Though previous presidents have stayed out of primary fights, Trump was far more politically active in seeking to shape the face of the Republican Party. Still, Biden has endorsed three Democrats who were running in House primaries in 2022, and also endorsed Wes Moore, the Maryland Democrat running against Trump-backed Dan Cox in Maryland’s gubernatorial primary.

While Trump has been focused on endorsements and “putting his image in the Republican Party,” Biden “is more similar to past presidents in that he has not engaged in primary elections,” Walling told Fox News Digital.

Though Trump as president was far more active politically in handing out endorsements, even in primary contests in 2018, as well as 2020 and the current midterm cycle, Biden has dipped his toe in early endorsements as president. By early July, Biden had endorsed three Democrats in congressional primaries, two of which won. In addition to the House and gubernatorial endorsements, Biden has endorsed Rep. Karen Bass, D-Calif. — once considered a short lister for Biden’s vice presidential pick — in her campaign to be mayor of Los Angeles.

In comparison, by the end of August 2018, Trump’s only midterm cycle as president, he had endorsed 14 Republican House candidates and would go on to endorse a total of 49 by the general election. He also had endorsed 18 Senate contenders and 14 candidates for governor across the nation by Sept. 1, 2018.

This year, Trump has been even more active, endorsing 22 Senate candidates and over 100 House contenders.

Biden has started speaking more about the November midterm elections, framing it as a choice between “semi-fascism” of the GOP, as he called it in a speech in Maryland this week, versus freedom and democracy.

During his speech to the Democratic National Committee in Maryland, Biden announced his endorsement of Moore. “I respect conservative Republicans,” Biden said in his speech. “I do not respect MAGA Republcans.”

One of the Democrats Biden endorsed in the primary season — Rep. Shontel Brown, D-Ohio — did welcome the president during his visit to Cleveland in June. Biden complimented Brown, asking her to “remember me when you’re president.”

CAMPAIGN ADS SHOW DEMOCRATS RUNNING REPUBLICAN MESSAGES AS THEY SEEK TO DISTANCE THEMSELVES FROM BIDEN, PARTY

But some Democrats running in tight congressional races, however, have been cool about tying themselves to Biden.

Over a dozen political ads from across the country reviewed by Fox News Digital show Democratic candidates campaigning as being independent of their own party leaders, with some even highlighting how they opposed President Biden’s agenda. 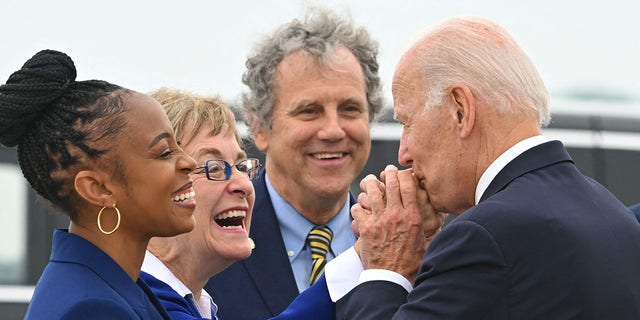 One of the strongest ads from a candidate seeking to not be tied to Bidencame from Rep. Nancy Kaptur, D-Ohio, Friday, where a narrator states: “Joe Biden is letting Ohio solar manufacturers be undercut by China, but Marcy Kaptur is fighting back.” The narrator declares that Kaptur is not working for Biden, but is “working with Republican Rob Portman, protecting our jobs.”

DEMOCRATIC REP. MARCY KAPTUR TOUTS ‘FIGHTING BACK’ AGAINST BIDEN WEEKS AFTER EMBRACING HIM ON CAMPAIGN TRAIL

The strategy of running against the national party, while still aiming to keep that party in power, is not new — and could help to bring over voters in the middle, who are not solid Democrat or Republican voters.

“Him endorsing a Democrat is like throwing them a concrete life preserver,” Mike Shields, a Republican strategist and former chief of staff for the Republican National Committee, previously told Fox. “It’s just not going to help them. It’s actually going to harm them. I think most Democrats in competitive races are going to say, ‘I would rather not have a president whose approval rating is in the 30s anywhere near my campaign.’”

Biden’s low approval ratings have risen slightly over recent weeks, though it is still underwater, and the recent legislative victories appear to have boosted his popularity.

The president is expected to give a speech Thursday in the battleground state of Pennsylvania, where he is expected to continue to urge voters to reject “MAGA Republicans” as a threat to democracy.