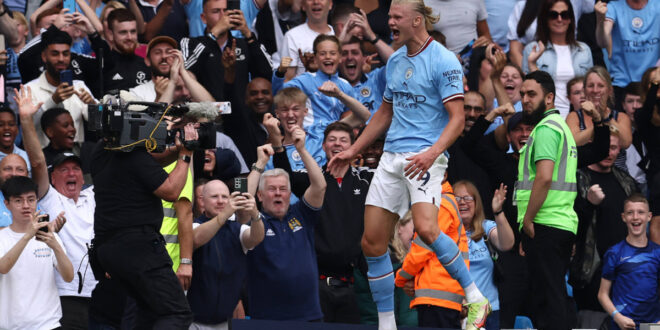 Erling Haaland, the brilliant 22-year-old striker from Norway, was already locked in as one of the Premier League’s most impressive newcomers this year. His performance for Manchester City on Saturday continued a hot start for the young star.

City got an early scare from Crystal Palace at the Etihad, surrendering a John Stones own goal in the fourth minute, and a header from Joachim Andersen midway through the first half. The second half was all City, with Haaland stealing the show.

After Bernardo Silva cut the Palace lead to one in the 53rd minute, Haaland followed it up with the tying goal less than 10 minutes later.

A few minutes later, he tapped in his second goal from short range to push City up a goal.

He completed the hat trick in the 81st minute, bursting through two defenders to blast one past Vicente Guaita off of a beautiful through ball from Ilkay Gundogan.

With the hat trick, Haaland has six goals in his first four Premier League matches, and becomes the first player this year to score three times in a game. Manchester City is atop the Premier League table early with 10 points so far, tied with Brighton.
Watch Premier League soccer with fuboTV. Start free trial today.

Previous China is all in on foldables — and Honor’s CEO thinks the rest of the world is ready, too
Next Johnny Depp and his friend Angelina Jolie’s relations are tense?