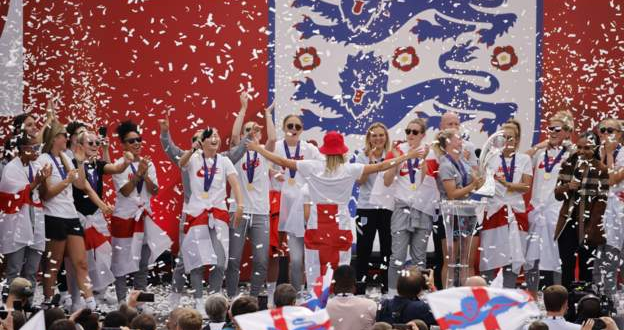 Sarina Wiegman says England’s players have stopped partying and are ready to move on from their Euro 2022 triumph and qualify for the 2023 World Cup.

Thirty-four days after being crowned champions of Europe, the Lionesses take on Austria in Wiener Neustadt – their first match since the Euros.

“The game develops so much and every country is so eager to improve.

“So are we and this is just the beginning,” added the England boss.

England need one point against Austria to qualify for the 2023 World Cup in Australia and New Zealand.

The Lionesses, who beat Germany 2-1 at Wembley on 31 July to become European champions, have one qualifying game left after Saturday – against Luxembourg in front of around 30,000 fans at Stoke next Tuesday.

But Wiegman is keen for her side to get the job done in Austria.

“I feel like even though on the 31 July, yes, we were partying, but the players are already looking forward,” she added.

“We want to qualify for the World Cup, of course, that’s what we are supposed to do at the stage we’re in and then we want to be successful.”

Defender Millie Bright said there was no danger of England being flat after the highs of the summer.

“It’s always difficult coming back off tournament and getting straight back into it, but as footballer that’s your job,” she added.

“At some point you have to look forward to the next challenge. Our minds are completely set on the task in mind.”

‘This stadium is small, it is a little disappointing’

The setting for Saturday’s qualifier could not be more stark than Wembley where England’s women celebrated their first major trophy in front of 87.192 fans.

The Stadion Wiener Neustadt has just 3,000 seats and is next door to an air strip.

During Friday’s pre-match news conference, Wiegman and Bright struggled to make themselves heard at times as planes took off and landed.

“It is a little bit disappointing. But it also shows that the women’s games are developing so much that we need to think a little bigger, and we can play in bigger stadiums.”

Wiegman will make at least two changes in Austria.

Striker Ellen White has retired since the Lionesses were crowned European champions, while midfielder Fran Kirby, who also started the final, is out with a foot injury.

White’s retirement from football has left a spot to be filled, with Alessia Russo expected to come in on Saturday.

However, Chelsea forward Lauren James, 20, is in the squad and could make her senior England debut at some stage. Houston Dash striker Ebony Salmon, 21, could add to the cap she earned in a friendly against Northern Ireland in February 2021.

“There are a lot of really good players fighting for that spot,” said Salmon. “For me, if I can work on what I need to work on, being around these players in camp is only going to make me a better player.”

Wiegman marked a year as Lionesses boss this week, having started in her role on 1 September 2021.

Two of those wins have come against Austria – a 1-0 World Cup qualifying victory at the Stadium of Light last November and a similar scoreline in the opening match of Euro 2022.

Beth Mead has 12 of those, while there have been eight hat-tricks during the qualifying campaign – three for Mead, two for Ella Toone, and one each for White, Lauren Hemp and Russo.

Austria, semi-finalists at Euro 2017, are assured of at least a play-off spot.

“It’s a special game for us, we play against a fantastic team that deserve to be European champions,” said Austria boss Irene Fuhrmann.

“We want to make it as hard as possible for England. Football shows that everything is possible but we, of course, need a magical night to take something from England and we’re realistic about that.”