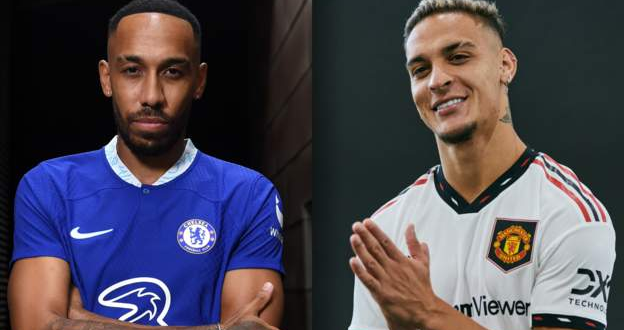 A remarkable summer transfer window closed on Thursday with a number of new spending records set – including the most expensive ever deadline day signing in Manchester United’s £82m purchase of Anthony.

That deal helped set a new Premier League spending record of about £1.9bn – smashing the previous record of £1.4bn in 2017 – and dwarfing the rest of Europe.

Nine of the 20 top flight clubs spent in excess of £100m as total expenditure bounced back after two seasons of Covid-impacted decline.

The combined outlay of the 20 clubs during the window, which was open from 10 June until 1 September, was 67% higher than the previous summer’s total of £1.1bn.

According to financial services firm Deloitte, the 2022/23 season already has the highest transfer spend since the two-window season began before this season’s January transfer window has even taken place, exceeding the previous record of £1.86bn set in 2017-18 by 3%.

Some of Deloitte’s other key findings from the window include:

Tim Bridge, lead partner in Deloitte’s Sports Business Group, said: “The record level of spending during this transfer window is a clear indication of Premier League clubs’ confidence, as fans return to stadia and a new broadcast cycle begins.

“It’s now become part and parcel of the Premier League that clubs are willing to pay significant sums to maximise performance. This season, the desire to acquire playing talent has reached new levels as the pressure for clubs to stay in the competition is higher than ever before.”

What were the deadline-day signings?

Fourteen of the 20 Premier League clubs made at least one new signing on deadline day. Highlights include:

Manchester City bolstered their defence with the signing of Switzerland international Manuel Akanji from Borussia Dortmund on a five-year deal.

Liverpool also added a midfielder to the squad with Brazil international Arthur Melo joining on a season-long loan from Juventus.

Leicester signed Belgium centre-back Wout Faes from French club Reims on a five-year deal to replace Wesley Fofana, who joined Chelsea for about £70m on Wednesday.

Nottingham Forest signed three players to make it 21 new faces this summer, with defender Loic Bade the last to arrive on loan from Rennes.

Chelsea announced the final two deals of the night, with Pierre-Emerick Aubameyang joining from Barcelona on a two-year deal and Switzerland midfielder Denis Zakaria joining on a season-long loan from Juventus.

What were the big transfers of the summer?

It was the start of a new era at Chelsea this summer with Todd Boehly taking over the club from Roman Abramovich and the American billionaire certainly made his presence felt, spending more money in a single window than any club in Premier League history.

According to football website Transfermarkt, more than £250m was splashed out on the likes of Raheem Sterling, Marc Cucurella, Kalidou Koulibaly and Pierre Emerick Aubameyang, which is also the second-highest summer spend by any club in the world after Real Madrid (£292m) in 2019.

Manchester United broke their own spending record to sit second on the Premier League spending list.

They brought in the likes of Casermiro, Christian Eriksen and Lisandro Martinez over the summer, with their deadline-day capture of Antony taking their total spending up to around £214m – the fourth-highest summer spend by a single Premier League club ever.

It was also a summer of strikers as a number of goalscorers made big-money moves including Erling Haaland to Manchester City, Darwin Nunez to Liverpool, Gabriel Jesus to Arsenal, Gianluca Scamacca to West Ham and Alexander Isak to Newcastle – the latter two being club-record deals.

Nottingham Forest are back in the Premier League for the first time since 1999 and judging by their summer shopping they are determined to stay there.

Steve Cooper’s side have embarked on an extraordinary spending spree, bringing in an incredible 21 new players for £145m, breaking the British record for most signings in a single season.

According to Transfermarkt, the previous English record was Crystal Palace in the summer of 2013 with 17 signings. The British record was previously held by Livingston in summer 2001 and Dundee United in 2000 with 19 signings.

It could have been 22 new faces but a late move to sign Belgium striker Michy Batshuayi from Chelsea fell through.

The pressure that money can bring

With such lavish sums being spent across the division the pressure has been cranked up on those clubs who may not be able to afford such exorbitant transfer fees.

Scott Parker lamented that his Bournemouth side were “ill-equipped” for the Premier League after their 9-0 thrashing by Liverpool last weekend.

Owner Maxim Demin responded by sacking him two days later, saying: “We must also show belief in and respect for one another.”

Leicester have also had a quiet window, bringing in just two players and letting a number of established stars leave including goalkeeper Kasper Schmeichel and key defender Fofana, who made it clear he wanted to leave the club for several weeks before eventually completing his move to Stamford Bridge.

The Foxes have also started badly on the pitch and were booed by their own fans after Thursday’s 1-0 home defeat against Manchester United left the club rooted to the bottom of the table.

Like Parker, Leicester boss Brendan Rodgers has also publicly expressed frustration at his club’s lack of transfer activity, though perhaps not in quite as explicit terms as the former Cherries boss.

“I understand the fans’ frustration. They see all their rivals getting players in and we’re not getting any,” he said after the United defeat.

“With the greatest respect, we have not had the help in the market this team needed.”

The ones that got away

Though Premier League spending reached record levels there were still a number of deals that never materialised.

Cristiano Ronaldo wanted to leave Manchester United this summer just 12 months after returning to the club from Juventus but the Portugal forward remains at Old Trafford.

The Red Devils also agreed a £63.5m deal with Barcelona for Frenkie de Jong but a dispute between the Spanish club and Netherlands midfielder eventually scuppered the move after a pursuit that lasted much of the window.

Everton winger Anthony Gordon was subject of a £45m bid from Chelsea but the Toffees did not want to sell the England U21 international and eventually managed to keep him at Goodison Park.

Arsenal made a late move to sign Aston Villa midfielder Douglas Luiz but saw two bids, the latter worth £23m, turned down by the Midlands club.

But perhaps the most unusual non-transfer story of deadline day was Bamba Dieng.

Leeds were so confident of landing the Marseille forward chairman Andrea Radrizzani tweeted that the club were set to “welcome” him to Elland Road.

But with the 22-year-old at the airport poised to head to the UK from France, Marseille’s Ligue 1 rivals Nice moved in to hijack the deal.

With a 9m euros move seemingly imminent, Dieng suffered a minor problem with the medical and the deal was off.

As Radrizzani later tweeted: “Part of the madness of deadline day”.