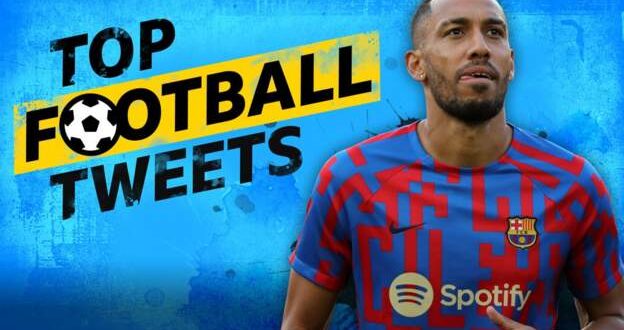 Leeds United chairman Andrea Radrizanni said what everyone was thinking about the “madness” of transfer deadline day; Nottingham Forest signed a record 21 players in one window; and clubs went back to the ’90s with their player announcement videos.

Here are some of the social media highlights from the summer transfer window.

That’s Dieng of that then

Radrizanni offered a refreshingly honest assessment of incomings at Elland Road this summer.

He tweeted in response to a fan just hours before a deal for 22-year-old forward, Bamba Dieng fell through.

It looked as if the Marseille striker was on his way to Elland Road, until an offer from Nice hijacked those plans.

Fair play to Radrizanni for fronting up the disappointment.

BBC Sport certainly cannot say whether Dieng’s movements were affected by seeing the Leeds chairman seeming to concur with a fan’s opinion that the player represented an underwhelming signing.

Willy or won’t he?

Willy Bolly’s departure from Molineux seemed all but a formality when the 31-year-old Ivory Coast defender mysteriously failed to report for duty before Wolves’ match against Newcastle on Sunday.

Wolves manager Bruno Lage was fairly unequivocal in his view that the player was trying to force an exit.

Either way, on Thursday Boly got his move to Nottingham Forest, making him Steve Cooper’s 19th signing of the summer. The Midlands club then followed that business with the signings of 23-year-old winger Josh Bowler and 22-year-old defender Loic Bade. That made it 21 signings for Forest this summer – a British record for one transfer window.

Chelsea may have secured a deal for 33-year-old former Arsenal striker Pierre-Emerick Aubameyang, but, for a moment, it looked as if they had signed TikTok star Khaby Lame.

A Melo window for Liverpool

Over the past month, it’s been hard to tell whether Liverpool are in the market for midfield reinforcement or not, with Jurgen Klopp saying earlier this week that he would sometimes “like to risk a bit more” with signings.

The injury to Jordan Henderson in their win over Newcastle United on Wednesday may have forced the Reds to act on deadline day and they have signed Brazil midfielder Arthur Melo on a season-long loan from Juventus.

The 26-year-old’s career has been hampered by injury up until now. With Jordan Henderson, Thiago Alcantara, Naby Keita and Alex Oxlade-Chamberlain all currently missing, he should fit in well.

Most of the conversation around him has centred on jokes based about the fact he shares a name with a ’90s cartoon character.

Back to the ’90s and noughties

Speaking of late-millennial popular culture references – this summer’s batch of transfer announcement videos appear to be packed with them.

For instance, we had Burnley announcing the signing of Belgian winger Anass Zaroury using a clip from the film American Psycho, released in 2000.

Birmingham City went even further back into the archives, using a clip from 1991 film The Silence of The Lambs to usher in 19-year-old Tunisia midfielder Hannibal Mejbri.

Unfortunately, the club had to repost this because they spelt the player’s name wrongly the first time around.

Announcement videos – best of the rest

We’ve gathered some other notable videos from across the summer.

Manchester City’s announcement of Erling Haaland followed a fairly straightforward narrative through-line. Kudos to the prop department, however, for finding a couch and cushions to match those in the childhood picture.

West Ham must have dipped into their piggy-bank for this high-level production, heralding the arrival of 25-year-old Brazilian midfielder Lucas Paqueta.

Possibly the oddest edition of the whole window was that of Georginio Wijnaldum’s arrival in the Italian capital.

Fans pointed out Wijnaldum seemed to be channelling Moto Moto from the Madagascar film franchise here.

And, finally, Bayern Munich’s social team got in touch with their wistful side when they created this twee mini-film to announce 22-year-old Netherlands defender Matthijs de Ligt.

Well, that’s deadline day wrapped up for now. We’ll just leave you all with this odd little ode to our favourite day of the year.