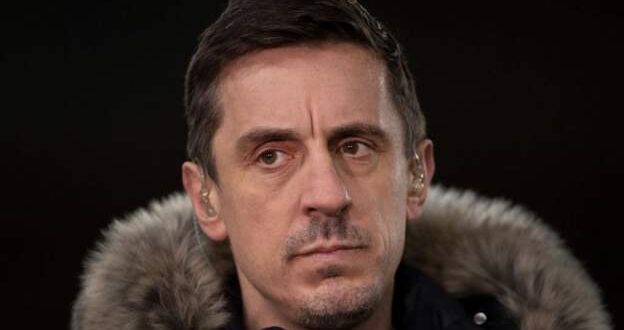 Pundit Gary Neville is to be referred to the Attorney General for a social media post he made during his ex-Manchester United team-mate Ryan Giggs’ domestic violence trial.

The judge in the case, Hilary Manley, has referred it as a possible case of contempt of court.

The jury in Giggs’ trial was discharged on Wednesday after failing to reach verdicts on any of the three charges.

Any retrial will not take place until at least 5 June 2023, the judge said.

Neville’s agent Di Law told the Daily Mail that the 47-year-old Sky Sports pundit was “absolutely adamant” that the post was referring to the Glazer family’s ownership of Manchester United and not the Giggs trial.

Contempt of court law prohibits publishing any information that creates a “substantial risk” of serious prejudice to a trial – including on social media. It is a criminal offence, punishable by a fine or up to two years in prison.

The judge referred to the post by Neville on Wednesday.

Judge Manley said: “Given the author is a person with a high public profile and his social media account has 1.5 million followers, it could be seen to be an attempt to influence on-going criminal proceedings and could be contempt of court.

“Accordingly, I am referring the matter to the office of the Attorney General for the consideration of a potential prosecution.”

During the trial the lawyer acting for the prosecution said a social media post “by a member of the public who has a direct connection with this case” had been brought to his attention.

He added: “This may be a matter that requires immediate action, so far as that individual is concerned.”

The lawyer defending Giggs, Chris Daw QC, wanted to make it “crystal clear” the defendant did not have anything to do with the Instagram post.

Judge Manley allowed the trial to go ahead after deliberation and as there was no indication that any jury member had seen the post.

The former Manchester United footballer had been on trial for four weeks. The Crown Prosecution Service has a week to decide whether to pursue a retrial.