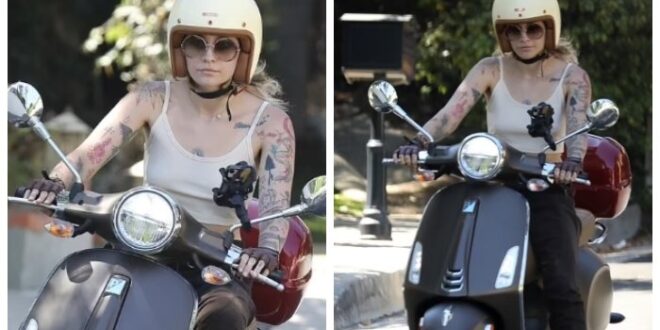 Michael Jackson’s daughter Paris Jackson stepped outside in style as she drove around Los Angeles on her matte brown Vespa scooter on Wednesday.

The singer was papped wearing a cream-colored tank top that showed off her lean tattooed arms and black leggings, looking absolutely amazing as ever.

The 24-year-old daughter of the late King of Pop, Michael Jackson, had a busy week as she appeared on the cover of Flaunt Magazine Wednesday and released a Spin Magazine live performance session.

However, this sighting comes after Jackson’s children paid a heart-touching tribute to the singer on what would have been his 64th birthday.

The singer’s two oldest children, Paris and Prince Jackson posted photos from their childhood with their famous father on their Instagram account Monday.

Prince, 25, wrote next to a picture of his dad feeding him as a baby, ‘Happy birthday to the greatest!’

Meanwhile, Paris, 24, shared a throwback image of her father giving her a kiss when she was quite young and wrote ‘hbd’ with a heart emoji.

The Grammy award winner died aged 50 in 2009 at his Los Angeles home after a massive overdose of hospital tranquilizer propofol, which had been prescribed by his doctor.