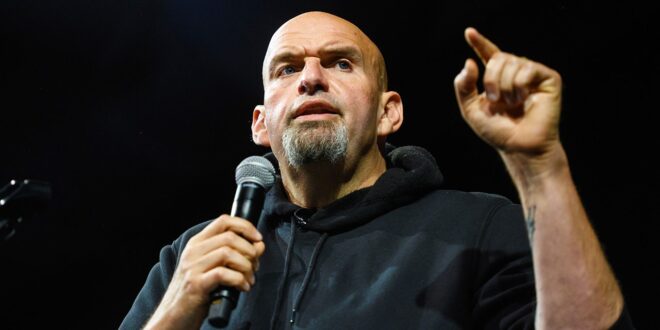 Fetterman told teachers’ union they’ll be his ‘first’ call if elected, they can ‘tell’ him how to do his job

FIRST ON FOX: Pennsylvania Lieutenant Governor John Fetterman, a Democrat, told teachers’ unions that they would be his “first” call for education policy should he get elected.

While taking questions during a January speaking gig at a Pennsylvania State Education Association Political Institute event, Fetterman said that, if elected, he would be a staunch ally of teachers’ unions. His comments had not been reported previously.

“I’m not going to sit up here and pretend that I know exactly what’s needed, I’m going to turn to you,” Fetterman said. “If you send me to Washington, D.C., you’ll be the first people that I call and want to sit down and meet with and find out what you need.”

“What would be most helpful? How can we be most supportive? What are the resources you need?” the Pennsylvania Democrat continued. “Because, ultimately, you’re the professionals.”

“I’m not going to tell you how to do your job, you’re going to tell me how I can do my job better to support all of you,” he added.

Fetterman, whose kids go to one of Pennsylvania’s most-expensive prep schools, also said that he is “always going to stand with” the teachers’ unions.

Fetterman, who is running for Senate against Republican candidate Dr. Mehmet Oz, was gunning for an endorsement from the National Education Association (NEA) when he made the promise to the unions.

The Pennsylvania progressive ended up receiving the endorsement in June of this year with the “strong support” of the Pennsylvania State Education Association.

Critical race theory has become a subject of national debate and is something Fetterman dismissed as “not an issue” of importance — however, the teachers’ unions he pledged himself to are loud backers of the controversial subject.

The Democratic Senate nominee has been a vocal supporter of teachers’ unions throughout his political career.

Education became a spotlight issue during the 2021 Virginia gubernatorial contest, which saw former Democrat Governor Terry McAuliffe lose out to now-Governor Glenn Youngkin, a Republican, over parents’ involvement in their kids’ education.

In the second debate, McAuliffe shot himself in the foot by saying he did not believe parents should play a role in their children’s education — something Youngkin seized on immediately as the former governor doubled down on his statement.

After McAuliffe’s remark, the race shifted quickly in favor of Youngkin, especially as critical race theory and transgenderism in schools became central issues.