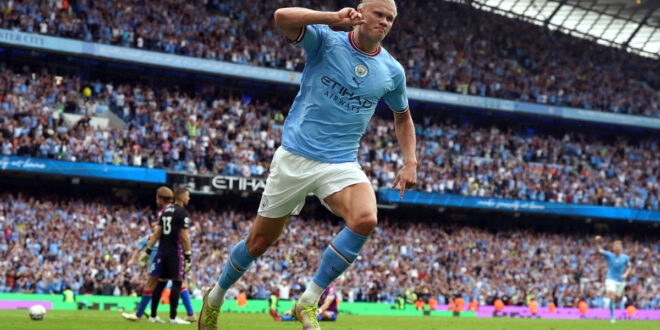 As complex as it has become, with its set-piece coaches and analytics teams and intricate tacticians within every team around the globe, soccer can sometimes be a simple game. For example, when you take one of the best young strikers since the turn of the century and put him in a team that creates goalscoring opportunities better than any other, you instantly have an unstoppable attacking force.

As young as Erling Haaland is (he turned just 22 in July), he has virtually every attribute you can ask for from a striker: pace, strength, intelligence and otherworldly finishing. And as powerful as Manchester City has been (four Premier League titles in five years), it has missed just one thing since Sergio Agüero started to decline after the 2018–19 season: a pure goalscorer to spearhead the attack. Now after a summer transfer from Borussia Dortmund, two of European club soccer’s most electrifying forces of the last few years have joined together. Haaland has lit the league on fire, scoring nine goals (a record for most goals in a player’s first five Premier League games) and becoming the first player with two hat tricks before the end of August. The partnership between player and club has somehow raised the level of both, creating an attack that seems destined to shatter records and perhaps shift the power balance on the European front in favor of City.

The last two years have seen a combination of Agüero, Gabriel Jesus, Ferran Torres and, at times, nobody at all fill the striker role at City. The use of a false nine grew increasingly common as Pep Guardiola adjusted to life after Agüero. While City never really struggled to put the ball in the net—it led the Premier League in goals and won the league in both seasons—there was still the sense that there was another level it could reach, particularly against top competition.
In 10 league games against the rest of the Premier League’s “Big Six” in 2020–21, City scored 14 goals on 19.7 expected goals (xG). Those games resulted in five wins, two draws and three losses—solid results, but the lack of elite finishing clearly hampered the team. The numbers last season were better against England’s best sides, but Guardiola’s team underperformed its xG in seven of its nine draws or losses on the season.
In examining those nine matches, the need for a world-class striker was evident. There were quite a few miscues in front of goal, ones that a player more confident in that area would be expected to finish 99 out of 100 times. City itself knew this hole existed when it made a hard push to sign Tottenham’s Harry Kane before the season. When the deal fell through and Guardiola settled on $130 million Aston Villa winger Jack Grealish, the club knew it was entering the season without finding a solution for its only position of need.

Kevin De Bruyne finished last season as the team’s leading goalscorer with a staggering 15 goals on just 6.5 xG. Four of City’s forwards underperformed based on their xG. There were wasteful moments galore, particularly in the few slipups in Premier League play.

Of course, every attacker is going to miss a sitter from time to time. Haaland himself did so in the first competitive match of his City career, missing a gaping net in the Community Shield vs. Liverpool.

But what Haaland does bring (and has already started to change in this City team) is elite finishing from everywhere inside the 18-yard box. He outperformed his xG in each of his three seasons in the Bundesliga. He’s already doing so in the Premier League, with nine goals on 6.6 xG.

Perhaps just as impressive—and important—as his finishing is his movement. Guardiola’s system over the last several years has seen loads of different attackers and midfielders flying into the box, making it difficult for defenders to predict which player is actually looking to get in behind. But at times, it would also leave space in the middle where a run should’ve been made had a true striker been on the field.

For a team that scored more than just about anyone else in Europe, City was strikingly mid-table in terms of crosses completed last year. It’s not hard to see why.

In the draw against Southampton, here’s an example of a perfect ball sent in behind the defense by João Cancelo—and nobody’s able to get near it. There simply isn’t anyone occupying that space at the edge of the six-yard box, especially late in the contest when charging runs from midfielders are going to be harder to come by.

The remarkable part of Haaland’s movement is his relentlessness. He’s a 90-minute, 6’4″ energizer bunny at striker that will keep making the right runs until he gets service.

Here just past the hour mark against West Ham, Haaland has his eyes solely on receiving the ball in behind on the counter. He receives an inch-perfect through ball from De Bruyne, and even with the defense turned and expecting it, he’s through on a one-on-one that he coolly slots home.

The best example of what he’s bringing to City came in his hat trick against Crystal Palace. Each goal showcased a different aspect of his skill set. On the first, with his side trailing 2–1, Phil Foden looks to dink a cross in behind, something he did sparingly a year ago.

Haaland anticipates the ball on the edge of the six-yard box, beating the defender to the spot and easily slotting it home with his head. When City is on the ball, Haaland lives in the middle of the penalty box, making run after run and awaiting a ball like this one. The movement into the box from other City players is still there, but Haaland will occupy that space in the center that was sometimes vacant.

His second goal was perhaps the easiest one he’ll get all year, but it was made possible solely by his positioning. John Stones scuffs a shot, and Haaland is anticipating a ball at the back post that ends up right at his feet for a simple tap-in. Again, it’s a space typically only taken up by a striker whose mind is solely set on goalscoring.

The third, by far the most skillful, shows exactly what makes him so dangerous. With City already leading in the 80th minute, Haaland is absolutely pleading for the ball on the counterattack. İlkay Gündoğan obliges, and Haaland keeps the center back on his hip before finishing emphatically past Vicente Guaita.

The astounding goalscoring numbers may continue. Haaland is averaging just 23 touches per 90 minutes, and over two goals. That scoring rate will likely fall back to Earth, but there’s a good chance City finds more ways to regularly get him service. There’s still an adjustment period—after the game against Crystal Palace, Haaland joked that he was happy Foden “finally” played the ball to him.
Combine all this with the fact that he’s still years away from his prime—and will also have the benefit of five weeks off in the middle of the season during the World Cup—and there’s no reason to think he won’t threaten Alan Shearer and Andy Cole’s Premier League record of 34 goals (and their accomplishments took place in a 42-game season; Mohamed Salah holds the 38-game record with 32).

The early signs are showing that no matter the competition, there may not be any stopping Haaland. The next evolution of Pep Guardiola’s Manchester City has arrived.