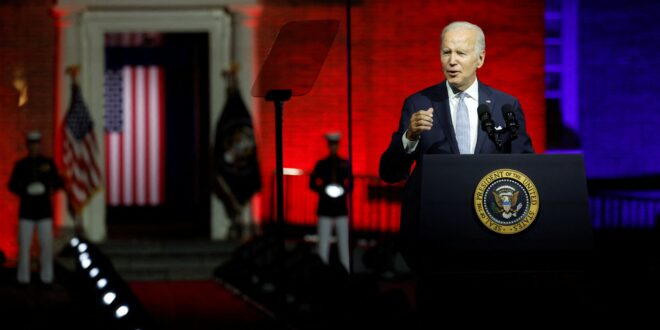 President Biden Thursday aimed to frame the state of U.S. politics as a battle between “equality and democracy” and a GOP allegedly assaulting those principles in a campaign-style speech at Independence Hall in Philadelphia.

And it comes as Democrats feel they have increasing momentum ahead of the November elections, owing, they say, to voters motivated by a revulsion to GOP policies on social issues like abortion, and to former President Donald Trump himself.

“These two documents, and the ideas they embody – equality and democracy – are the rock upon which this nation is built,” Biden said of the Declaration of Independence and Constitution, both written at Independence Hall.

President Biden is framing the midterms as part of, “the continued battle for the Soul of the Nation,” a White House official told Fox News.
(Drew Angerer/Getty Images)

“But as I stand here tonight, equality and democracy are under assault,” Biden added. “We do ourselves no favors to pretend otherwise.”

The tone and setting of the speech underscored Biden’s effort to portray the upcoming congressional elections as part of what a White House official said is “the continued battle for the Soul of the Nation.” The president leaned on that sort of rhetoric regularly during his 2020 presidential campaign and appears poised to bring back some of those talking points ahead of the 2022 midterms.

With the elections coming up, Democrats more broadly appear to be moving to emphasize attacks on Trump and social issues like abortion, which has risen in importance for voters, according to a Fox News Poll last month. They say GOP actions on these sorts of issues represent fundamental threats to Americans’ rights.

“MAGA forces are determined to take this country backwards,” Biden said, referencing Trump’s “Make America Great Again” slogan. “Backwards to an America where there is no right to choose, no right to privacy, no right to contraception, no right to marry who you love.”

Republicans, meanwhile, say soaring inflation and the economy are the key midterm issues. In the same Fox News Poll, inflation was still by far the top issue on voters’ minds as prices have increased significantly under Biden’s presidency.

House Minority Leader Kevin McCarthy, R-Calif., attacked Democrats on a litany of issues, including inflation, in an address ahead of Biden’s Thursday speech.

McCarthy added: “Democrats have had total control in Washington… So let me ask you this. How have they done?” 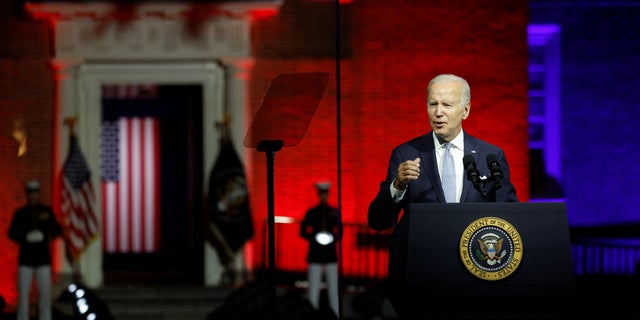 President Biden said Thursday that he doesn’t think all Republicans are “MAGA” Republicans. But, he said, the GOP overall is “dominated, driven and intimidated by Donald Trump and the MAGA Republicans.”
(REUTERS/Jonathan Ernst)

The minority leader also took a shot at Biden for his “semi-fascism” comment. He said Biden should “apologize for slandering tens of millions of Americans as ‘fascists.'”

Biden during his remarks slammed Trump, the Jan. 6 attack on the Capitol, Republican efforts to overturn the results of the 2020 presidential election, and Trump’s MAGA supporters.

“Donald Trump and the MAGA Republicans represent an extremism that threatens the very foundations of our Republic,” Biden said. “MAGA Republicans do not respect the Constitution. They do not believe in the rule of the law. They do not recognize the will of the people. They refuse to accept the results of a free election.”