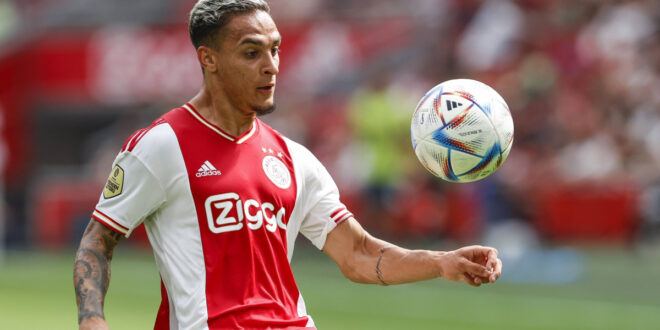 Manchester United’s long-winded pursuit of Antony has come to its conclusion, making the Ajax star the most expensive Eredivisie player in the Dutch league’s history.

According to ESPN, the two sides have agreed to a €95 million ($94.8 million) with €5 million in add-ons, with the 22-year-old signing a five-year contract at Old Trafford. Man United confirmed the transfer on Tuesday. The reported fee easily breaks the record set by former Ajax stars Frenkie de Jong and Matthijs de Ligt (€75 million) in their respective moves to Barcelona and Juventus in 2019.

Since arriving at Ajax from São Paulo in 2020, Antony recorded 18 goals and 14 assists in 57 league appearances for Ajax while also helping the club to two Eredivisie titles. He also made his Brazil debut in 2021—recording nine caps—and won gold at the Tokyo Olympics with Brazil.

The Brazilian was not named in the Ajax matchday squads for its last two games during his drawn-out transfer saga. On Friday, transfer insider Fabrizio Romano said Antony told him that the forward has been asking to leave the club since February.

“I was very happy in Amsterdam, I won titles at Ajax, made friends and built part of my career, but now I reinforce that I am ready and full of motivation to follow my story and my dreams,” Antony said, per Romano.

“People need to listen to me and understand that my motivation moves me towards happiness. I need this to continue performing at a high level. Ajax will always be in my heart.”

The move will see Antony reunited at Old Trafford with former Ajax teammate Lisandro Martínez and manager, Erik ten Hag, who is in his first season in charge of Manchester United.
More Soccer Coverage:

Previous The Samsung Galaxy A23 5G is available from September 1st in the USA
Next Britney Spears voices concerns she’s a ‘bad mother’: ‘Pause for a second!’