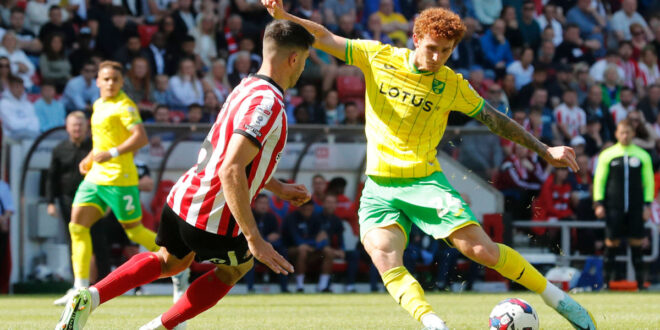 There’s an old adage that coaches will fall back on when asked about a referee’s decisions and how it impacted a game. In some form or another, it centers on the notion of doing enough with what the team can control so that the decision-making, as far as it relates to the game’s result, is effectively taken out of the referee’s hands.

A similar approach can be applied to a coach’s roster decision for an upcoming camp or competition. If a player is performing so well and so effectively, mastering what he can control, then there’s really no decision left for the coach to make at all. It’s all rather organic.

That’s essentially what a few strikers in the U.S. men’s national team player pool are doing with a penultimate U.S. camp on the horizon and the World Cup dangling in the not-so-distant future.

For the last couple of weeks now, it’s been the same story abroad: goals or goal contributions for Josh Sargent, Jordan Pefok and Haji Wright, and a strengthening sense of momentum indicating that all three will be recalled for next month’s gathering and friendlies vs. World Cup–bound Japan and Saudi Arabia.

After the weekend’s activity, Wright has five goals in his last three games. Meanwhile, with four goals in the last three games—and, more importantly, operating in his proper place on the field—Sargent is suddenly tied for second in scoring in the second-tier English Championship. And on the heels of three goals in four games in all competitions, Pefok tallied two assists in a mammoth win for Union Berlin at Schalke, a result that puts the club tied on points with Bayern Munich atop the Bundesliga.

All three have seemingly lapped Ricardo Pepi, who finally started for Augsburg but underwhelmed and was taken off shortly into the second half of another defeat for the struggling club. His is a case where the productivity—or lack thereof—is leaving far too much in the hands of manager Gregg Berhalter as it relates to his immediate international future.

The USMNT’s ever-evolving squad is like a game of Whac-A-Mole, though. One problem area seemingly gets sorted, and another creeps up. And in this case, the new problem is a matter of inactivity, injury or both for four of the team’s core players.

Tim Weah will miss the next two weeks with an ankle injury, if the timetable that Lille president Olivier Létang declared last week holds up. It all but rules him out of any transfer or loan situation before Thursday’s deadline—no club is going to shell out for spoiled goods, after all; he had been linked with a move to Valencia, where he would have teamed with U.S. midfielder Yunus Musah—but it means he could make it to the last pre-World Cup international break with a maximum of one club appearance. It’s far from ideal for a player who at one point was pushing for a starting role.

On his opposite wing, Christian Pulisic is still second-fiddle at Chelsea, reduced to a bench role and averaging fewer than 20 minutes per game through the first four Premier League matches this season. Raheem Sterling’s arrival was an indicator that this was likely, and while Pulisic’s U.S. standing is not going to be in jeopardy over this, his club standing remains in purgatory. With three days until the transfer deadline, does he push aggressively for a move away, risking a significant change to his environment with the potential payoff of a greater on-field role? Or does he just stick it out and do what he’s done for the duration of his time at Stamford Bridge—seize on opportunities and turn them into something greater?

A U.S. teammate who doesn’t appear to have even that latter choice as an option is Sergiño Dest, who remains out in the cold in Barcelona. Xavi is seemingly doing everything but packing Dest’s bags himself, proclaiming loudly that the fullback knows his situation at the club—spoiler: It’s not promising—all while Barça goes in search of reinforcements at the position. But Dest is reportedly adamant that he stays put, which raises quite the quandary. His skill, quality and importance for the U.S. are no secret, but can he get by and still go to Qatar if he’s just wholly inactive for the months leading into the World Cup? If there’s a core U.S. player to watch prior to Thursday’s transfer deadline, it’s him.

And speaking of inactive players key to the U.S.’s mission, there’s Gio Reyna and Dortmund’s approach to the young star. He was omitted entirely from the club’s trip to Hertha Berlin this past weekend, and Dortmund maintains that it’s out of precaution given how much of last season Reyna missed due to injury.

“He actually trained very well this week. We have a very specific program tailored to him, so we make sure that we gradually build him up,” Dortmund manager Edin Terzić said. “He just didn’t feel good anymore before the game. And when he feels that, then there’s no point in risking the next setback.

“Gio’s is a special situation. Gio has been struggling with injuries for almost a year now. He kept fighting back and was then quickly disappointed again when the injuries kept returning.”

Reyna has made one appearance so far this season, and given the slow build back to a normal routine, it’s hard to envision a World Cup where he’s able to feature regularly from the start in such a tight and intense group window. But Dortmund is doing what it can to ensure he’ll at least be fit to go, period. And like Pulisic, Reyna is of the stature that if he’s healthy, he’s on the plane. There’s little in the way of a decision to make regarding his place on the U.S. squad, as long as he can play.

“We’ll continue to build him up carefully, in the hope that he’ll start training with us again next week,” Terzić continued. “We just have to learn from the past. We had so much time with players out and it’s about reducing the injuries first, and also the time that the guys are injured. Better to go without for one or two games than risk going without someone for months.”

Previous Christian Pulisic to Stay With Chelsea Through Transfer Window, per Report
Next Bruce Willis wife Emma ‘learning’ to live with ‘paralyzing grief’ amid his aphasia