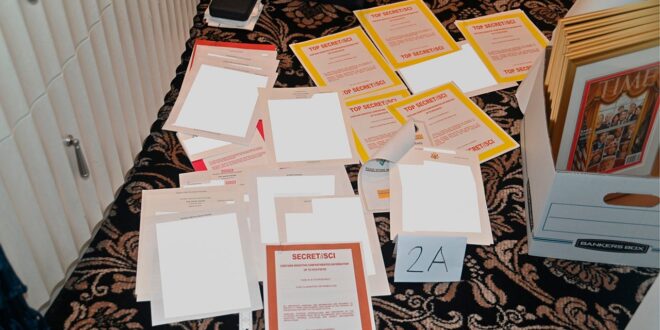 DOJ says Trump has no right to special master

Former President Donald Trump’s lawyers Wednesday slammed the Justice Department for an allegedly “extraordinary” filing arguing against appointing a “special master” to review documents taken by the FBI during a raid of his Mar-a-Lago estate.

“The United States Attorney’s Office, has filed an extraordinary document with this Court, suggesting that the DOJ, and the DOJ alone, should be entrusted with the responsibility of evaluating its unjustified pursuit of criminalizing a former President’s possession of personal and Presidential records in a secure setting,” Trump’s lawyers wrote.

“[T]he Government twists the framework of responding to a motion for a Special Master into an all-encompassing challenge to any judicial consideration, presently or in the future, of any aspect of its unprecedented behavior in this investigation,” Trump’s lawyers also said.

The Justice Department on Tuesday released an image of highly classified documents it said it removed from former President Donald Trump’s estate as part of a raid earlier this month.
(FBI)

“Even yesterday, the Government’s Response gratuitously included a photograph of allegedly classified materials, pulled from a container and spread across the floor for dramatic effect,” Trump’s attorneys said later in the brief.

In a Tuesday filing, the DOJ said Trump’s request lacked merit for several reasons. Among those, the DOJ said, were that Trump had no standing because the records belong to the government and not to him; that the Justice Department has already reviewed the documents; that Trump does not have a valid executive privilege claim because the Justice Department is “within the Executive Branch;” and that the appointment of a special master could impede the investigation.

The Justice Department filing also included more detail on the records taken from Mar-a-Lago. And it argued that “government records were likely concealed and removed” from a storage room in Mar-a-Lago, “and that efforts were likely taken to obstruct the government’s investigation.”

It further included a photo of several highly classified documents that were taken from Mar-a-Lago.

On the government’s argument that Trump lacks standing in the case because he does not own the government documents in question, Trump’s team wrote Wednesday, “It is the reasonable expectation of privacy in one’s home that triggers the obvious standing.”

Trump’s lawyers also said a “privilege review team” assigned to check any documents seized from his home for executive privilege was not enough. That was in part because, they wrote, the team only reviewed documents taken from “45 Office” and not all documents removed from the Mar-a-Lago premises.

Trump’s attorneys in previous briefs raised concerns over executive privilege, the Fourth Amendment and alleged political targeting of the former president due to the investigation being conducted by President Biden’s DOJ. The case is before Florida federal district court Judge Aileen M. Cannon.

The Wednesday reply brief from Trump’s lawyers comes ahead of a scheduled hearing on the motion for a special master at 1 p.m. ET Thursday. Over the weekend, Cannon announced her “preliminary intent” to appoint a special master.

It’s unclear what effect, if any, an appointment of a special master could have on the underlying investigation into Trump. Cannon’s order did not discuss a separate request from Trump for an injunction blocking the government from continuing to review the materials it removed from his estate, though that may be a topic of discussion in the hearing.

The government initiated the raid on Trump’s estate earlier this month in response to what it believed to be a violation of federal laws: 18 USC 793 — gathering, transmitting or losing defense information; 18 USC 2071 — concealment, removal or mutilation; and 18 USC 1519 — destruction, alteration or falsification of records in federal investigations.

Trump, meanwhile, says that the documents were brought to his home while he was the president and that he ordered them declassified under broad authority he claims is given to the president.