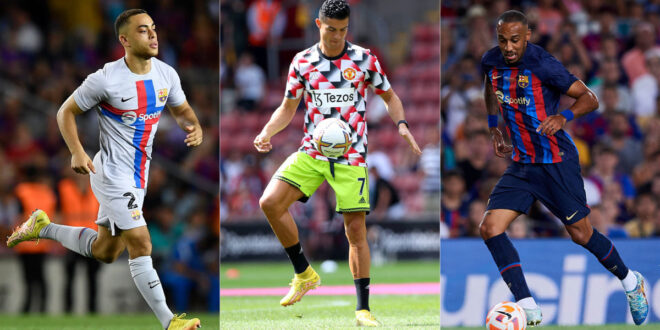 The transfer window closes for the summer across Europe’s top leagues on Thursday, with the deadline hitting and the dealing finally coming to an end after weeks of rumors, links, loans and signings.

So much of the important business has long been conducted. The likes of Erling Haaland, Robert Lewandowski, Sadio Mané, Matthijs de Ligt, Darwin Núñez, Casemiro, Raheem Sterling and Gabriel Jesus are among the biggest names already featuring for their new clubs, but they’ll be joined by one last set of players on the go—albeit a set for which there won’t be much time afforded to acclimate to new surroundings.

The Premier League’s clubs have been the biggest spenders this summer (nearly $2 billion with a day to go), particularly Manchester United and Chelsea, while Barcelona, after selling off future assets to make it happen, has undergone an extreme makeover of its own. The three clubs remain involved in some of the biggest lingering transfer sagas, never content with the status quo despite the season carrying along in earnest.

In terms of the “Big Five” leagues across Europe, the deadline hits the Bundesliga at noon ET, followed by Serie A at 2 p.m., Ligue 1 at 5 p.m. and La Liga and the Premier League at 6 p.m.

Follow along here for updates from throughout the day, as the transfer window shuts and players—aside from free agents—are locked into their locations until after the 2022 World Cup this November and December (refresh for most recent updates).

The Argentine winger trades one Champions League club for another, filling the void left behind by Manchester United-bound Antony at Ajax—at least for the rest of this season. The 28-year-old’s loan comes with an option to buy.

Leicester relented and sold its rising star of a center back to Chelsea for a reported $87 million, and he promptly signed a seven-year deal with the Blues.

Ruiz is part of a Spanish makeover of PSG’s midfield, with Valencia’s Carlos Soler expected to join as well. Ruiz’s portion cost PSG a reported $21.5 million.

With PSG loading up in its midfield, there was no place for Paredes, who heads to Juve on loan for the season. He’s the second PSG player to go to Juventus this summer, following Ángel Di María’s free transfer.

The 6’7” Austrian striker completed a reported $17.4 million move to the Premier League side, with whom he signed a five-year deal. He scored 22 goals in his last two seasons in the Bundesliga, including a career-high 16 in 2020-21.

Manchester United manager Erik ten Hag proclaimed Wednesday that Cristiano Ronaldo would be staying put, despite the player’s desire to go to a club featuring in the UEFA Champions League this season. Barring a complete reversal on that unambiguous statement or an offer that Man United cannot refuse, Ronaldo will have to get used to the dimmer lights of the UEFA Europa League instead. Napoli and Sporting CP, the latter of which was Ronaldo’s first club, are reportedly the only potential destinations. (BBC)

Pierre-Emerick Aubameyang could be headed for a reunion with Thomas Tuchel at Chelsea, with the Barcelona forward at the center of talks between the two clubs. One offer could see Marcos Alonso and $11.5 million go to Barcelona, with the Gabonese forward heading to Stamford Bridge. (Fabrizio Romano)

As if landing Fofana, Marc Cucurella and Kalidou Koulibaly were not enough in remaking its back line, Chelsea is reportedly seeking a move for RB Leipzig center back Joško Gvardiol, which could cost a club that has already spent roughly $300 million this summer another $90 million. Gvardiol would stay at Leipzig for the rest of this season under the terms of the proposed deal. Leipzig CEO Oliver Mintzlaff previously stated that Gvardiol was not for sale. (The Telegraph)

Chelsea is also reportedly after Mexican midfielder Edson Álvarez, with the Blues said to have made a $50 million offer to Ajax for the 24-year-old, who could be part of the succession plan for N’Golo Kanté and Jorginho. (ESPN)

Everton manager Frank Lampard claims the door is shut on a potential transfer for Anthony Gordon, the 21-year-old winger who has drawn Chelsea’s interest and scored in consecutive games for the Toffees. (BBC)

Potentially related to that is word that Christian Pulisic reportedly will not get the move that he wants to secure more regular playing time before the World Cup, as Chelsea won’t sanction a loan of the U.S. men’s national team superstar. (The Athletic)

Another U.S. standout, right back Sergiño Dest, is reportedly closing in on a season-long loan to AC Milan from Barcelona, where he’s effectively been frozen out by Xavi. (Fabrizio Romano)

Bernardo Silva has been at the center of reports linking him with a move from Manchester City to Barcelona, but he put that notion to bed himself following a 6–0 win over Nottingham Forest on Wednesday, claiming he would be staying at the Etihad. (City Transfer Room)

Man City has a deal lined up for Dortmund center back Manuel Akanji, which will cost $17.5 million. (Sky Sports)

Leeds United and Southampton are in hot pursuit of PSV Eindhoven winger Cody Gakpo, who was reportedly a Manchester United target earlier in the summer. (Sky Sports)

Brentford could become the latest Premier League club to break its own transfer record, as it eyes a move for Shakhtar Donetsk’s $35 million-rated, 21-year-old Ukrainian forward Mykhaylo Mudryk, who has also reportedly been on Arsenal’s radar. (The Guardian)

25 PRICIEST MOVES OF THE SUMMER

(All values obtained via media reports and converted to USD)

6. Richarlison (Everton to Tottenham for $72.6 million)