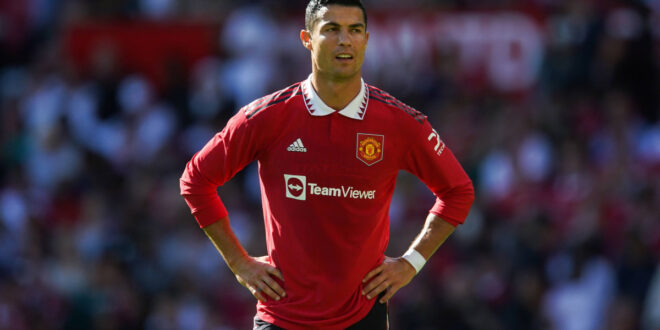 You’ve got to hand it to the screenwriters this season. Or at least the Premier League scheduling team. Having Manchester United play Thursday, Sept. 1—transfer deadline day—looks like a stroke of genius for any supporter or neutral who enjoys the thrill and drama of the window going down to the wire.

Perhaps no club is in the transfer spotlight quite like the Red Devils, who have stabilized after a pair of season-opening losses but remain front and center when it comes to the remaining business that will be sorted before the window shuts until the winter.

So far, Man United has signed Antony, Casemiro, Lisandro Martínez, Christian Eriksen and Tyrell Malacia, but that incoming class could grow even more. It’s a potential outgoing sale, however, that has the attention in the window’s final days with Cristiano Ronaldo’s future potentially swirling, provided a realistic suitor comes along to pry “Mr. Champions League” from the ignominy of featuring on Thursday nights in the Europa League.

The transfer theater extends beyond Old Trafford’s Theatre of Dreams, though. Barcelona’s brazen summer could have yet another act, while Chelsea, despite an already-generous outlay from new owner Todd Boehly, is under order from manager Thomas Tuchel to sign even more players. Liverpool, which has been relatively quiet since handling its core business early, could also reenter the fray with Jürgen Klopp hinting at a need for midfield reinforcements.

As has been the case all summer, the Premier League is driving the financial push with England’s top flight already exceeding $1.5 billion in expenditures on transfer fees, presumably with more moves to come. Multiple clubs have shattered their previous transfer records, with the league’s spending power second to none globally.

With all of that said, here’s what to watch as the window shuts over the next couple of days and club futures are cemented across the continent:

REPORTEDLY AT THE FINISH LINE

The Newcastle goalkeeper is reportedly headed to Old Trafford on loan, with an option to make the move permanent, and he’ll back up—and compete with—David de Gea.

Fofana, Leicester City’s French center back, reportedly had his medical in New York and will become Chelsea’s latest big buy, following Raheem Sterling, Marc Cucurella and Kalidou Koulibaly. The reported terms of the 21-year-old’s deal mean he could become the most expensive defender ever, surpassing Harry Maguire. (UPDATE: Chelsea confirmed Fofana’s signing on Wednesday, announcing his arrival on a seven-year deal. It will reportedly cost over $80 million.)

The French power is taking on two Spanish stars, with Soler set to join for $18 million and Ruiz to follow for another $23 million in a pair of moves aimed at solidifying the midfield behind PSG’s legendary attacking trio. (UPDATE: PSG confirmed Ruiz’s arrival on Tuesday. He is signed on a five-year deal through June 2027.)

Paredes is out of favor at PSG, and with replacements being brought in, the Argentine midfielder is heading to Turin. PSG manager Christophe Galtier candidly revealed that Paredes has a deal with Juventus, leaving it to the two clubs to work out transfer terms before the deadline hits. He could face his still-current team in a matter of days: PSG and Juventus open up Champions League group play against each other.

As if poaching Erling Haaland wasn’t enough, it appears that City is going back to Dortmund to pry the Swiss center back from the German power. With Aymeric Laporte and Nathan Aké both suffering injuries, there’s a need for depth behind Rúben Dias and John Stones, and it’ll reportedly cost $17.5 million to make it happen.

The biggest name in the balance remains the Portuguese superstar, whose situation isn’t all that different now than it was six weeks ago. He wants to go play for a team in the Champions League, but only a handful can afford him, and the ones that can have either publicly passed on the opportunity, don’t have a need for him or don’t want to take on a player who will bring plenty of goals but whose presence alters how a club has to play. Napoli and Sporting CP, his first club, are reportedly the last two realistic options—or else Man United will have to find a way to make it work until at least the winter.

On the heels of being attacked and robbed at his home (fortunately he and his family appear to be O.K.), Aubameyang may be reuniting with Tuchel at Chelsea after previously enjoying success under the manager at Borussia Dortmund. Barcelona and Chelsea, as it feels like they’ve been all summer, are at the heart of yet another negotiation, which could result in the Gabon forward returning to London, where he starred for Arsenal.

Barcelona’s treatment of de Jong notwithstanding, the midfielder reportedly will get his wish to stay put. Manchester United signed Casemiro to bolster its midfield instead, and while Chelsea is reportedly interested as well—recent images of de Jong flying to London for personal matters didn’t help quiet the rumor mill—it does not appear as if Barça will be pulling this economic lever. Until the deadline hits, though, he remains a top target.

Memphis was reportedly close to a move to Juventus earlier this month, but it fell through (Juventus signed Polish forward Arkadiusz Milik instead). And if Aubameyang does indeed go to Chelsea, then it’s likely the Dutch forward will remain at Barcelona and play second fiddle to Robert Lewandowski. However, if Aubameyang-to-Chelsea doesn’t materialize and Barça is left with one-too-many forwards, might Memphis be primed for a late move?

Xavi has made it abundantly clear that there is no place for Dest at Barcelona this season, but the U.S. right back has reportedly been resistant to a move away from Camp Nou. Might the very real possibility that no club minutes will be played before the World Cup sway his mind? Man United—where Dest’s former Ajax manager, Erik ten Hag, is running the show—has been mooted as a suitor for weeks and is reportedly seeking a late swoop, which would then allow the club to move on from Aaron Wan-Bissaka.

The Athletic reported Monday night that Pulisic would be staying put, with Chelsea denying him any loan opportunities and not receiving offers compelling enough to sell the U.S. international outright. That Chelsea would prefer to not loan Pulisic to clubs in the Premier League that it will be competing against (Man United, Newcastle were reported suitors) is not all that surprising—Callum Hudson-Odoi, for instance, was just loaned abroad to Bayer Leverkusen—but it leaves him in a situation where he’ll be clawing for minutes leading into the World Cup, barring a late deadline twist.

The 21-year-old Everton winger has reportedly been a Chelsea target—another direct competitor for Pulisic, even after the club signed Sterling—though the Toffees have been hesitant to part ways. The player reportedly wants it to happen, and Chelsea will reportedly pay about $70 million to make it so (including add-ons), which is a staggering number for a player as relatively unaccomplished as Gordon (six Premier League goals in 40 appearances, although scores in consecutive games), as talented as he may be. It all evidently comes down to whether Everton’s resistance will be broken as the sand slips through the hourglass.

The writing has been on the wall for Navas ever since PSG signed Gianluigi Donnarumma last summer, and with Costa Rica headed to the World Cup, the veteran goalkeeper needs regular playing time to stay sharp. Napoli is a reported destination for the 35-year-old, who remains one of the world’s top players at his position, although a recent back injury put his status in the balance. He has returned to training since.

The Dutch winger appeared to be in Man United’s crosshairs, but with Antony in tow, it would appear the Red Devils are out. That doesn’t mean other Premier League clubs aren’t in the mix for the 23-year-old, with Southampton said to be a leading candidate.

Ajax reportedly has its eye on the Argentine winger, now that Antony is headed for Man United. Chelsea’s Hakim Ziyech, who used to play for Ajax, was said to be an option as well.