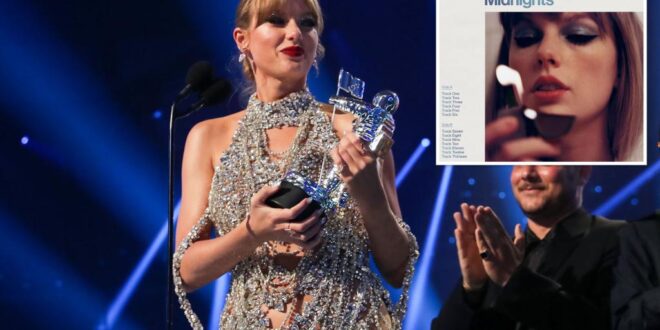 Taylor Swift’s surprise album reveal was a shock for VMAs producers, too

Taylor Swift’s album announcement at the 2022 MTV Video Music Awards was “…Ready For It?”: a surprise.

VMAs producers Bruce Gillmer and Jesse Ignjatovic said “all the stars aligned” at this year’s award show and — in turn — boosted ratings, Billboard reported on Tuesday.

“Her fans are so intense that just her appearing gives our show a lift. Not only did she appear, she won and she won big. She also chose our stage to announce her new record, which gave us this massive lift coming out of the show,” Gillmer revealed, adding that the singer and the ceremony “have a long history together, a highly successful history, and there’s mutual love and respect.”

As for the album reveal: “That wasn’t planned. We were blessed to have that.”

The “All Too Well” songstress sent fans into a frenzy with her announcement during her acceptance speech while accepting the award for Video of the Year — which happened to be the last award of the night.

“I thought it might be a fun moment to tell you that my brand-new album comes out Oct. 21,” she revealed, which fans quickly put together as the birthday of Kanye West’s ex, Kim Kardashian.

“I will tell you more at midnight,” she then teased, later heading to social media to announce the fitting title of her forthcoming project: “Midnights.”

The “Shake It Off” singer has a long history with the VMAs. Kanye West infamously interrupted her acceptance speech at the 2009 ceremony, igniting an on-again-off-again feud. A year later, she returned to the VMAs stage to perform  “Innocent” — which was written about the West incident.

In 2015, she showed up with her famous “squad” of friends to accept “Video of the Year” for “Bad Blood.” She also squashed her beef with Nicki Minaj that night, joining the “Super Bass” rapper for a performance of “The Night is Still Young.” She also presented West with the Video Vanguard Award.

In 2017, VMAs mainstay used the award show to premiere her “Look What You Made Me Do” video, and performed a medley of hits during 2019’s show.

The producers also revealed that they fought the good fight to get a remote performance from Harry Styles at his Madison Square Garden show — part of a 15-day residency there — but that didn’t happen.

However, they credit Fergie’s surprise appearance with Jack Harlow during the show’s opening performance with keeping viewers of all demographics hooked to the show.

“The other sort of favorable wind that we got was about Fergie. She’s at home in California and hadn’t been on our stage or any stage in a long time,” Gillmer explained.

“Coordinating that whole performance, we had to have a tremendous amount of support from her label, Atlantic Records, from her manager and even with all of that it was a long shot. That came through at the 11th hour cause all the stars aligned. Almost every big moment in that show could have gone either way,” Gillmer added.

“We wouldn’t be honest if we didn’t tell you that we had a lot of good fortune, a lot of blessings, a lot of luck as well in terms of timing and things falling into place,” Gillmer told Billboard of the night’s successes.

The preliminary Nielsen figures for the VMAs, its pre-show and two on-air replays revealed that both TV and cross-platform consumption ratings were up from last year’s show.

According to the numbers, 3.9 million viewers tuned in to watch Sunday’s festivities across 12 Paramount Global cable channels and the broadcast network The CW — which is a 3% increase from 2021’s programming, which attracted 3.7 million viewers.