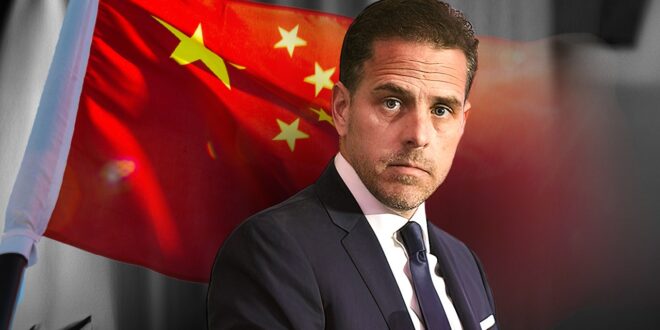 FIRST ON FOX: Hunter Biden was instrumental in helping a Rosemont Seneca Partners client and Democratic donor secure an event at the Chinese Embassy in Washington, D.C., after networking with one of the top officials at the embassy during a January 2011 luncheon hosted by then-Vice President Biden, according to emails reviewed and verified by Fox News Digital.

Those emails show that Hunter and his former business partner, Eric Schwerin, helped Marvin Lang, the managing director of Guardian Realty in Maryland, plan a dinner with the Chinese Embassy’s minister, Deng Hongbo, on April 28, 2011, which was later touted on China’s Ministry of Foreign Affairs website.

Ted Kaufman, a longtime friend of Joe Biden and part of his inner circle of advisers dating back to the 1970s, was the keynote speaker at the annual investment dinner and was paid $10,000 following the dinner for his services, according to an email from Schwerin to Lang.

Planning for the event appears to have started in December 2010 after Lang, who has donated tens of thousands of dollars to Democrats, emailed Hunter thanking him for meeting him for lunch and saying he was “excited” to form a “long relationship” with Rosemont, Hunter and Schwerin’s now-defunct investment firm. Guardian bills itself as a “fully integrated real estate investment company that develops, redevelops, acquires, manages, operates, and owns a portfolio A-/B+ commercial office space,” according to their website.

In December 2010, Marvin Lang thanked Hunter Biden for meeting him for lunch and said his company is excited to “work with Rosemont Seneca Partners, LLC and look forward to a long relationship.”
(Fox News Digital)

After some back-and-forth discussion between Hunter, Schwerin and Lang about possible venues for the event, Hunter emailed Schwerin on Jan. 12, 2011, saying, “Marvin wants to know where we are in on finding space for the dinner– Chinese embassy is his #1 choice.”

One week later, Schwerin sent an email to Lang that cc’d Hunter, saying Hunter had a lunch that included the “number three official” at the Chinese Embassy and that he could be “helpful” in securing the location for the Guardian Realty dinner.

“[I] just talked to Hunter and he said he sat with the number three official at the Embassy today at lunch and has contact information to follow up after the [Chinese] President has left the U.S.,” Schwerin wrote. “Hunter’s said his contact will be helpful, but the Minister won’t be able to focus on this until after the delegation has left at the end of the week. Sounds like this is the right contact though.”

Eric Schwerin, who was formerly Hunter Biden’s business partner, told Marvin Lang in a January 2011 email that a “number three official” at the Chinese Embassy would be “helpful” in helping Lang secure the Chinese Embassy for a dinner for his company.
(Fox News Digital)

Based on emails and news articles reviewed by Fox News Digital, the lunch that Schwerin is referring to in the email was the luncheon that then-Vice President Biden and then-Secretary of State Hillary Clinton hosted for Hu Jintao, China’s president at the time, in the State Department’s Benjamin Franklin Room on Jan. 19, 2011.

One of the emails that Schwerin sent to Hunter after midnight on the day of the luncheon said that Hunter was sitting at the same table as Ron Klain, who was the chief of staff for Vice President Biden until the end of January 2011 and is currently Biden’s chief of staff.

Eric Schwerin, Hunter Biden’s business partner at the time, informed Hunter in a January 2011 email that he would be seated at the same table as the “#3 at the [Chinese] Embassy” and said the official would be “the guy to ask for Guardian.”
(Fox News Digital)

Eric Schwerin, Hunter Biden’s business partner at the time, informed Hunter in a January 2011 email that Vice President Biden would be at the “head table” with JK, which appears to be John Kerry, and then-Secretary of State Hillary Clinton.
(Fox News Digital)

On Jan. 28, 2011, Zhou Jingxing, counselor and deputy director at the Chinese Embassy, responded to Hunter Biden’s email regarding his correspondence with “Minister Yang,” which appears to be referring to Yang Jiechi, who served as foreign minister from 2007 until 2013. Jiechi, who has been a member of the Chinese Communist Party since 1971, was elevated in 2017 to the Politburo, making him among the most influential and powerful officials in all of China. The Chinese Embassy did not respond to multiple Fox News Digital requests for comment on this.

“Minister Yang asked me to follow up with you directly. You will be receiving a formal request from Guardian’s Chairman, Marvin Lang, shortly but I wanted to put forward some dates that work on their end: May 5, 12, or 19,” Hunter Biden wrote. “We look forward to working with you and thank you for your help and consideration.”

Jingxing said they would “check with the Embassy logistics to see if the dining room is available on your proposed dates.”

In February, Lang started expressing concerns that the Chinese Embassy hadn’t yet confirmed a date. “We really need the approval for dinner in writing,” he would write to Schwerin.

Schwerin emailed Hunter on Feb. 28, 2011, saying Guardian Realty was getting “nervous” that the Chinese would back out at the last minute and was requesting a written confirmation letter. Schwerin asked Hunter if people at the Turkish Embassy were “nice” in case the dinner had to be moved there.

Hunter warned Schwerin that Lang’s insistence on obtaining a confirmation letter was “running the risk of seriously offending the Chinese.”

In February 2011, Hunter Biden warned Eric Schwerin that Marvin Lang’s insistence on obtaining a confirmation letter for his dinner at the Chinese Embassy was “running the risk of seriously offending the Chinese.”
(Fox News Digital)

Schwerin later assured Lang in early March 2011 that Hunter had confirmed the dinner with the embassy and that “we should be good going forward.”

“After our call yesterday, Hunter reached out to Minister Yang and Counselor Zhou and thanked them both for arranging the dinner, said he was looking forward to seeing them both at the dinner and reiterating our interest in having the Ambassador there,” Schwerin wrote. “It should have been clear how important this was to Hunter and Guardian, so we should be good going forward.”

In March 2011, Eric Schwerin later assured Marvin Lang that Hunter had confirmed the dinner with the embassy and that “we should be good going forward.”
(Fox News Digital)

In an email to Lang and Guardian Realty on March 10, 2011, Schwerin officially pitched Kaufman as “an ideal speaker” for the April event.

“As you may know, Sen. Kaufman (D-DE), was appointed Senator to fill VP Biden’s seat in 2008 and served as then Senator Biden’s Chief of Staff for nineteen years,” Schwerin wrote in the email, which was cc’d to Hunter. “He’s obviously someone we know well and wouldn’t recommend him if we didn’t think your investors would find him interesting.”

In April, Schwerin organized a meeting between Lang and Kaufman at a Starbucks in Washington, D.C. On April 15, 2011, Lang confirmed he met with Kaufman in an email to Schwerin, writing, “Met the Senator yesterday. He is terrific. … Please don’t forget to send some ‘words’ of thanks for us to say at the Chinese dinner.”

On April 29, 2011, one day after the dinner, Schwerin forwarded Hunter an email he received from Lang praising Kaufman as “terrific and very interesting.”

“As you could tell, there were a lot of questions from our investors. Last night was very exciting and we appreciated Hunter’s involvement. He is very talented and approachable, which is a nice quality. Plus, he is very smart,” Lang wrote. “I would appreciate a formal invoice for our files and will have the check sent out Monday, in any event. We also appreciated your involvement and help with the protocol, speech, etc.”

Hunter Biden, seen here, received praise from Marvin Lang for helping him secure the venue for the investors dinner, saying he “added intrinsic value in ‘closing out’ the successful evening.”
(Brendan Smialowski/AFP via Getty Images)

On this same day, Schwerin emailed Lang, “Let me know if you need a formal invoice of $10,000 from [Kaufman].”

On May 1, 2011, three days after the event, Lang thanked Hunter in an email for his “guidance and assistance in facilitating” the dinner.

“We appreciated the help that we received from Eric and Rosemont Seneca in drafting a ‘thank-you’ speech to the Minister and the help that we received on the appropriate gift for the Embassy,” Lang wrote to Hunter. “We also felt that you added intrinsic value in ‘closing out’ the successful evening with your follow-on explanation to Minister Deng’s answer to a question that was raised. It was a terrific evening.”

“Senator Kaufman was excellent, smart, friendly and very understanding of the political process,” Lang added. “Plus, he is nice, considerate man and deeply cares for your family. Thank you again for suggesting the Senator as a guest speaker.”

Lang and Kaufman haven’t been implicated in any professional or criminal misconduct.

On May 1, 2011, three days after the Chinese Embassy dinner, Marvin Lang thanked Hunter Biden in an email for his “guidance and assistance in facilitating” the dinner.
(Fox News Digital)

Two days later, Schwerin sent an email to Hunter with the subject line, “Marvin is happy,” and a screenshot from China’s Ministry of Foreign Affairs website about the Guardian Realty event.

“Minister Deng briefed his guests on the current state of China-US relations as well as the opportunities and issues of China-US business cooperation,” the ministry’s website reads. “Minister Deng also had an exchange with the US side on how to strengthen the mutually beneficial and win-win economic and trade relations and enhance mutual trust and understanding between China and the United States. Mr. Lang and his party viewed a video on China and had a tour of the Embassy before the meeting.”

The China’s Ministry of Foreign Affairs website promoted Marvin Lang’s dinner on their website a few days after it was held.
(Fox News Digital)

This is not the only time that then-Vice President Biden hosted a luncheon for the president of China. In 2015, Biden hosted a State Department luncheon for Chinese President Xi Jinping. Fox News Digital previously reported that Vice President Biden’s executive assistant sent an email to multiple relatives of Biden, including his brother-in-law, John Owens, who adamantly signaled his desire to attend. Hunter was also copied on the email.

“Yes Kathy,” Owens responded. “I would like to attend this one. I know I have passed up everything else, but this is a bit different. I just rec’d this so I do not know what VBO [Valerie Biden Owens] is going to do. Do you have my info to respond with picture, etc, or do you want me to do that.”

Owens had reached out to Hunter Biden in 2014 for help in securing a business license to expand his telemedicine company in China, saying it needed to be “secured very quickly,” according to emails.

The White House, Schwerin, Hunter Biden’s attorney and Lang did not respond to requests for comment.

Previous Apple’s iPhone: a visual history from 2007 through 2022
Next Beto O’Rourke returning to campaign trail in Texas after bacterial infection