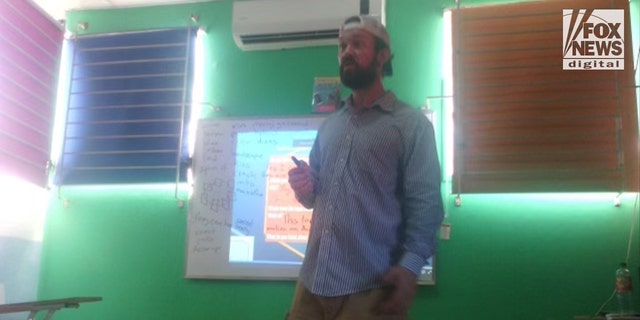 EXCLUSIVE: A new photo shows the former fugitive and suspected killer Raymond “RJ” McLeod at the head of his El Salvador classroom, days after U.S. marshals and local police arrested him near the Pacific Ocean after six years on the lam.

McLeod, 37, is accused of brutally killing his then-girlfriend, Krystal Mitchell, in San Diego in 2016, then fleeing the country. After several sightings in Central America, marshals say he settled down in El Salvador and took up the life of an English teacher.

Marshals and Salvadoran authorities arrested McLeod around 4:30 p.m. Monday after receiving a tip that he was teaching at a school in Sonsonate, about 40 miles west of San Salvador near the Pacific Ocean, as Fox News Digital was first to report.

Mitchell’s mother, former police detective Josephine Wentzel, came out of retirement to help track down her daughter’s killer. She told Fox News that McLeod had been laying low in the Colonia Angelica neighborhood of Sonsonate, described by locals as “kind of dangerous.”

Raymond “RJ” McLeod, the former fugitive accused of murdering his girlfriend Krystal Mitchell in San Diego in 2016, pictured here teaching a class in El Salvador, where he was allegedly laying low as an English instructor while on the U.S. Marshals’ Top 15 Most Wanted List until his capture Monday.
(Josephine Wentzel)

The ex-Marine was an “avid bodybuilder and heavy drinker” with a history of domestic violence even before the slaying, according to the marshals.

After the coronavirus pandemic, McLeod cut down on his drinking, returned to the gym and was frequently seen at the local soccer stadium, Wentzel said. He had no car and was always seen walking around town. 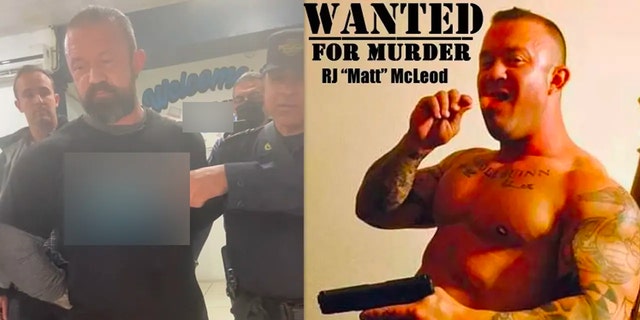 A tip led marshals to a school in Sonsonate, El Salvador, where RJ McLeod was allegedly teaching English.
(US Marshals/San Diego DA)

At the time he became a fugitive, McLeod stood 5 feet, 11 inches tall and weighed around 230 pounds, according to authorities. In photos taken after his arrest, he appeared fit but leaner, concealed his tattoos behind a long-sleeved shirt despite the heat and had grown out his hair and beard.

McLeod was the first suspect to ever enter the U.S. Marshals’ Top 15 Most Wanted List with a bounty as high as $50,000. 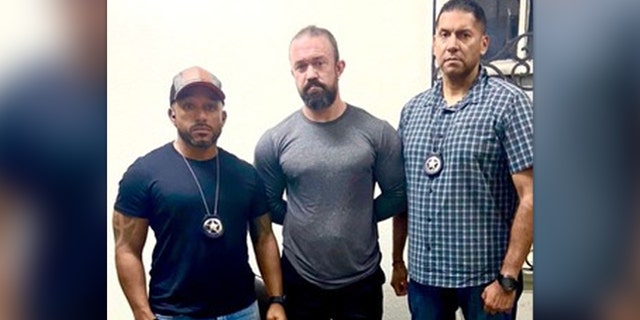 Marshals flank RJ McLeod after his arrest in Sonsonate, El Salvador, on Monday, Aug. 29, 2022.
(US Marshals)

“This defendant’s brazen attempt to evade justice is over and the work to hold him accountable in a court of law for the murder of Krystal Mitchell can now begin,” San Diego District Attorney Summer Stephan, who is prosecuting the case, said in a statement. “Huge credit goes to the victim’s mother who never gave up searching for her daughter’s killer and worked closely with our office and other law enforcement to make this arrest possible.”

“RJ McLeod does not deserve to be called a U.S. Marine,” Grace told Fox News Digital on Monday. “He savagely murdered Krystal, and then, like a coward, went on the run.”

Deputy Marshals Francisco Barajas and Luis Ramirez flew down to El Salvador to assist local and national police in his capture at around 4:30 PT Monday and were escorting him back to the U.S.

“He enjoys hurting women for its own sake,” psychologist Dr. Michael Bourke told Grace during filming of the special. “He’s not someone that’s doing it for some other purpose. He simply enjoys it.”

Michael Ruiz is a reporter for Fox News Digital. Story tips can be sent to [email protected] and on Twitter: @mikerreports