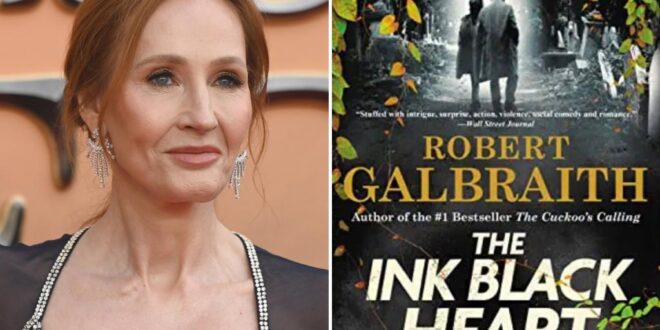 J.K. Rowling has been mocked for writing a new novel about a women who is violently murdered after the fictional character was accused of transphobia by online trolls.

“The Ink Black Heart” — written by the “Harry Potter” author under her pen name Robert Galbraith — was released on Tuesday, and is the sixth book in her “Cormoran Strike” series.

The crime thriller revolves around a popular YouTube creator named Edie Ledwell, who is “canceled” by “social justice warriors” amid accusations that she is racist, ableist and transphobic.

The character is doxxed and subjected to rape and death threats before she is later found stabbed to death in a graveyard.

Rowling has herself been accused of possessing transphobic views and received death threats — but she says any parallels to her new novel are simply a coincidence.

“I should make it really clear after some of the things that have happened the last year that this is not depicting [that],” she told British comedian Graham Norton on his Virgin Radio UK show this past weekend.

Rowling’s cancel-culture backlash started in June 2020 when she sarcastically responded to an article about “Creating a more equal post-COVID-19 world for people who menstruate.”

“’People who menstruate,’” she tweeted. “I’m sure there used to be a word for those people. Someone help me out. Wumben? Wimpund? Woomud?”

The author was subsequently mocked on Twitter over her new book, with one writing: “J.K. Rowling releasing a transphobic book under her transphobic pseudonym about being bullied online for being transphobic is beyond parody.”

Another snickered: “If any person personifies how becoming very wealthy dulls you from the humanity that made you successful in the first place, it’s J.K. Rowling. Imagine writing a whole pity party of a book because trans Twitter was mean to you after you were mean to them.”

Rowling has indeed faced the wrath of Twitter users and was reportedly doxxed. (The term “doxxing” refers to the act of posting sensitive, personal information online as a means of punishing or harassing the intended target by inviting trolls to abuse them.)

Last November, the author accused three trans-rights activists of sharing a photo outside her Scotland home, with the address of the house visible.

“I’ve now received so many death threats I could paper the house with them, and I haven’t stopped speaking out,” she wrote in a Twitter thread at the time.

Meanwhile, police in Scotland opened an investigation earlier this month after a Twitter user issued a chilling threat against Rowling.

The author tweeted out a message of support after author Salman Rushdie was stabbed at an event in upstate New York.

“Don’t worry you are next,” the threatening Twitter user menacingly replied to Rowling.

A spokesperson for Scotland’s police subsequently stated: “We have received a report of an online threat being made and officers are carrying out enquiries.”