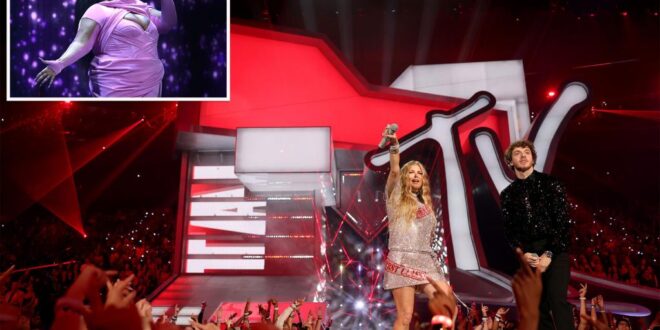 The preliminary Nielsen figures for the 2022 MTV Video Music Awards, its pre-show and two on-air replays are in — and both TV and cross-platform consumption ratings are up.

According to the numbers, 3.9 million viewers tuned in to watch Sunday’s festivities across 12 Paramount Global cable channels and the broadcast network The CW — which is a 3% increase from 2021’s programming, which attracted 3.7 million viewers.

Paramount says viewers watched 1.59 billion minutes of VMAs content across TV, streaming and social platforms. That’s a 14% increase from last year’s consumption and the second consecutive year that the stat has gone up.

It may come as no surprise — with scandals and drama surrounding the likes of Yung Gravy and Addison Rae, Moon Person Johnny Depp, Artist of the Year Bad Bunny, and butt- and boob-baring Måneskin — that online chatter around the award show is up, too, as this year saw a whopping 79% jump in viewing on social media.

According to analytics firm Talkwalker, the VMAs garnered 40 million social interactions — up from 38 million last year — outperforming the Super Bowl for two years in a row, as well as the March 27 Oscars featuring the infamous Will Smith/Chris Rock slap incident.

The action-packed VMAs hooked viewers at the start when Jack Harlow brought out Fergie for a “Glamorous” performance. Lizzo immediately took the stage once the duo wrapped up, synching her dance moves with the large video screen behind her.

A rumored — and quickly confirmed — virtual cameo from Johnny Depp quickly followed, as did the anticipation of Nicki Minaj’s 10-minute career-spanning performance before accepting the Video Vanguard Award.

To solidify viewership, Taylor Swift — dripping in diamonds — surprisingly arrived on the event’s black carpet. Fans thought her wardrobe was a nod to her “Reputation” album era — which recently became eligible for Swift to re-release — but ended up sending fans into a tizzy by announcing a totally new album instead.