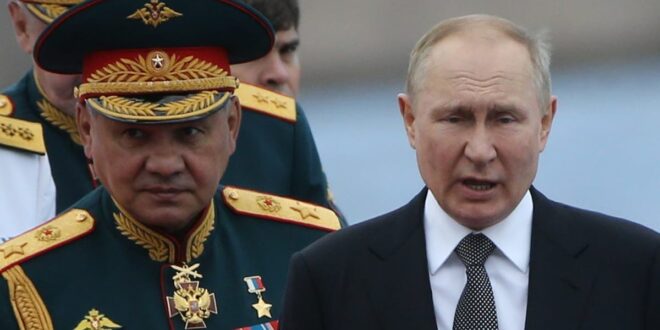 Putin sidelines Russia’s defense minister over stalled progress in Ukraine, according to the UK

Russian Vladimir Putin has sidelined Defense Minister Sergei Shoigu as the invasion of Ukraine enters its seventh month, according to a report issued Monday by the U.K. Ministry of Defense.

Operational commanders are now briefing the Kremlin directly on progress in Ukraine, with Shoigu taking a back seat.

“Russian officers and soldiers with first-hand experience of the war probably routinely ridicule Shoigu for his ineffectual and out-of-touch leadership as Russian progress has stalled,” the U.K. wrote in its intelligence update.

“Shoigu has likely long struggled to overcome his reputation as lacking substantive military experience, as he spent most of his career in the construction sector and the Ministry of Emergency Situations.”

Shoigu, who is originally from the Tuva region of Russia in southern Sibera, gained national popularity in the 1990s and 2000s as the minister of emergency situations by personally visiting the sites of natural disasters and terrorist bombings.

Putin chose him to be the defense minister in 2012, despite the fact that he had no military background or combat experience.

“If you look at who was in minister roles in 1999 and are still around now, there are only two names: one is Shoigu, the other is Putin,” Dmitry Gorenburg, Ph.D., a Russian military expert, previously told Fox News.

U.S. Secretary of Defense Lloyd Austin spoke with Shoigu in May and urged “an immediate cease-fire in Ukraine,” according to the Pentagon.

Putin ordered a sharp increase of troops by 137,000 to a total fighting force of 1,150,000 last week in an effort to replenish losses after six months of war.

Russian forces have captured nearly all of Luhansk and are trying to gain control of Donetsk, which are the two regions that make up the eastern Donbas. Fighting has also coalesced around southern Ukraine in recent weeks, with increased focus on Crimea, a peninsula that Russia annexed in 2014.

Fox News’ Bradford Betz contributed to this report, as well as the Associated Press.