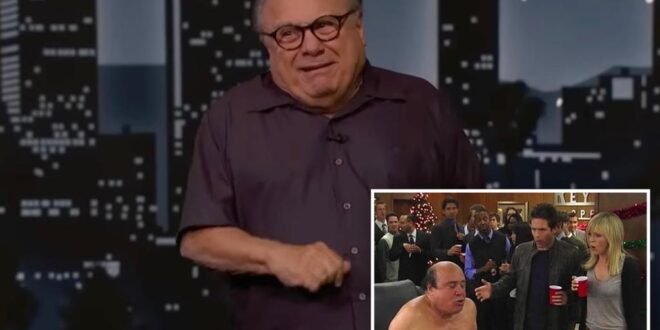 Danny DeVito recalls getting ‘nude like a halibut’ on ‘Always Sunny’

DeVito appeared on “Jimmy Kimmel Live” with fill-in host Nikki Glaser and talked about having no boundaries while promoting his new series “Little Demon.” During the interview, Glaser asked him if “It’s Always Sunny” had “broken” his boundaries.

DeVito was referring to the sitcom episode where he hid inside a couch to hear if his former employees say anything about him. In the end, his character Frank appears out of the couch with nothing on.

“OK, I’ll do that,” DeVito remembered thinking after he first read the script.

“Then you get there and you get on the set … it’s also a party, so there’s like 50 people you don’t know. You don’t think of that, you know what I mean,” he recalled.

DeVito revealed he wasn’t actually fully nude when the scene was filmed.

“You can’t come out in front of 50 people you don’t know with your wanger hanging out,” he explained. “So, they put a little cap on it.”

He further explained that he was oiled up by the makeup team to make it look like he was sweating profusely.

“So now you’re like back there waiting for your cue and you’re going to slide out of this thing naked like a halibut,” DeVito continued.

The whole situation was as funny as you’re picturing it to be because even co-star Kaitlin Olson forgot her line once while trying to film the scene.

“There’s this great thing on YouTube somewhere where Kaitlin forgets to say her line. It’s like she’s just looking right at me,” he said during the interview.

“Like a big blob of greasy flesh,” he added.

“It’s Always Sunny in Philadelphia” is the longest-running live-action sitcom in history. The TV show premiered in 2005. Rob McElhenney, Charlie Day, Glenn Howerton and Kaitlin Olson star in the sitcom alongside DeVito.