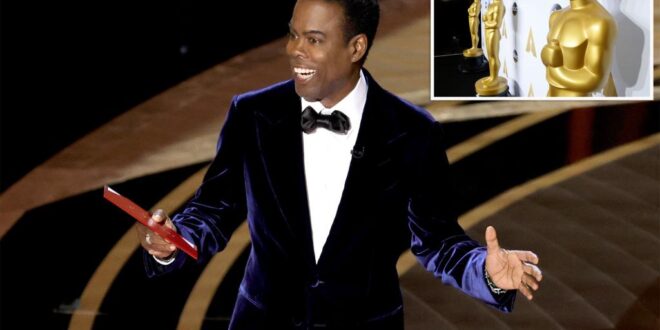 Chris Rock was asked to host 2023 Oscars — see his response

The 57-year-old comedian told a Phoenix comedy show audience on Sunday that he was asked to emcee next year’s event — but declined the opportunity.

According to the Arizona Republic, the “Everybody Hates Chris” alum told the crowd that going back to the Oscars would be like asking Nicole Brown Simpson “to go back to the restaurant” where she left her eyeglasses before she killed, in a reference to the murder trial of O.J. Simpson, who was acquitted in the case.

His rejected hosting duties would’ve come a year after Will Smith, 53, walked on stage on March 27 and slapped him at the Academy Awards for making a joke about his wife, Jada Pinkett Smith, about looking like “G.I. Jane” due to her bald head.

Rock also claimed he was offered — and turned down — a post-slap Super Bowl commercial.

In May, ABC’s President of Entertainment Craig Erich told Deadline that he was open to having Rock return as host next year. The choice, the executive said, would surely boost ratings.

“Obviously there was a lot of controversy [surrounding this year’s broadcast], which overshadowed a lot of the positive things about the show, but I was really happy with the program,” Erich stated. “It was the biggest bounce-back of any award show this season.”

But according to Smith, Rock is still “not ready” to talk one-on-one about the 2022 smackdown. Instead, on July 29, the “King Richard” star publicly apologized to Rock in a nearly six-minute YouTube video.

“So I will say to you, Chris, I apologize to you,” he said with visible contrition. “My behavior was unacceptable, and I’m here whenever you’re ready to talk.”

Rock has stayed pretty mum about the incident, with the exception of a few comedy shows in recent months.

“Yeah, that s–t hurt, motherf–ker — but I shook that s–t off and went to work the next day,” he declared while performing alongside Kevin Hart and Dave Chappelle at Madison Square Garden in July. “Anyone who says ‘words hurt’ has never been punched in the face.”

“I’m not a victim, motherf–ker,” the “Grown Ups” star declared the following day in Holmdel, New Jersey. “I don’t go to the hospital for a paper cut.”