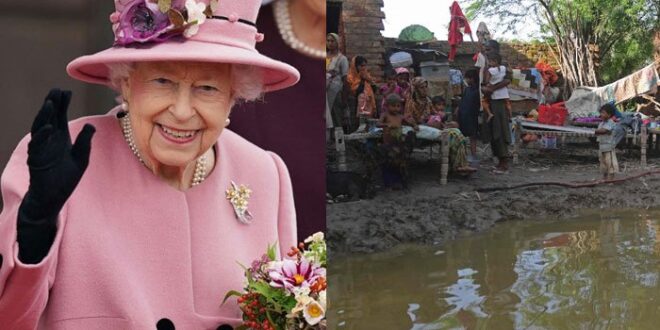 The British government has announced a relief package for the Pakistan flood victims for rehabilitation but the UK’s Queen has so far been mum on the worst crisis the country is facing.

A huge relief operation was underway and international aid began trickling in as Pakistan struggled to deal with monsoon flooding that has affected more than 33 million people.

Officials said 1,061 people have died since June when the seasonal rains began.

This year’s floods are comparable to 2010 — the worst on record — when more than 2,000 people died and nearly a fifth of the country was under water.

In 2010, Queen Elizabeth II made a personal donation to the relief effort for flood victims in Pakistan.

The monarch had given an undisclosed amount via the British Red Cross.

Besides personal donation, the Queen had also offered her ‘heartfelt’ condolences to the families and friends of those who were killed, and deep sympathy to all whose lives were affected.

But this time, the UK Royal family has not yet made any announcement in this regard.