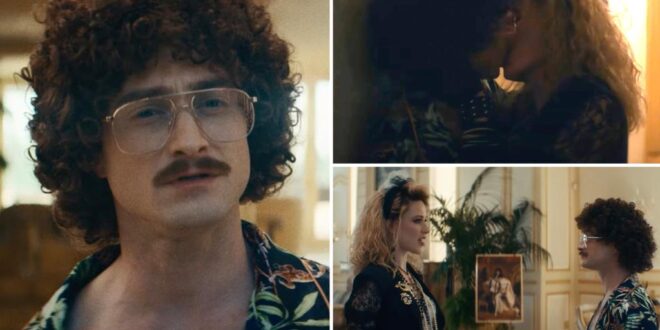 Neither one of them was acting like a virgin.

Daniel Radcliffe and Evan Rachel Wood have a torrid makeout session as early 1980s-era “Weird Al” Yankovic and Madonna in a new, hilarious trailer for the upcoming biopic “Weird: The Al Yankovic Story.”

“Harry Potter” star Radcliffe, 33, dons a wild wig, glasses and bushy mustache to play the now-62-year-old parody crooner, while Wood, 34, rocks the “Like a Virgin” singer’s eclectic style, including big, teased hair and a leather jacket.

In one scene, a flirty Madonna visits “Weird Al” at his massive mansion and asks if he will do a parody of her hit. The shot rapidly cuts to the two wildly kissing against the wall in the film, which documents the “White and Nerdy” rapper’s rise to fame.

The clip also dives into the accordion-loving Mad Magazine contributor’s put-upon early life and how he composed his parody songs, including “My Bologna,” “Another One Rides the Bus” and “I Love Rocky Road.”

“Be as weird as you want to be,” he declared to an awards show audience in the trailer, which also focuses on Yankovic’s struggle to be taken seriously.

“All I wanted was to make up new words to a song that already exists,” Radcliffe-as-Yankovic confessed in the trailer, discussing his creative process. “I’m tired of everyone thinking I’m some kind of joke.”

The movie will reportedly hold nothing back and explore every aspect of Yankovic’s “trainwreck” of a life — from his meteoric rise to fame with early hits like “Eat It” — a parody of Michael Jackson’s dance hit “Beat It” — and his Madonna parody “Like a Surgeon.” It will also delve into his torrid celebrity love affairs and famously depraved lifestyle.

“’Weird: The Al Yankovic Story’ takes audiences on a truly unbelievable journey through Yankovic’s life and career, from gifted child prodigy to the greatest musical legend of all time,” a press release noted about the film earlier this year.

The biopic will first premiere at the Toronto International Film Festival on Sept. 8 and then will debut on the Roku channel on Nov. 4.

Previous Gabby and Rachel want THIS star to lead the show
Next Sister of Marc Fogel, American held in Russia, questions why Biden admin is ‘dragging its feet’