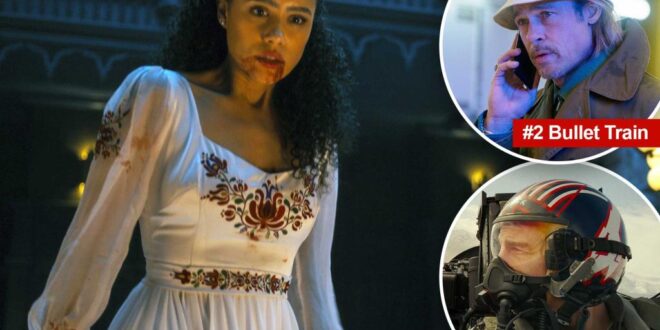 Moviegoers have more than gladly accepted “The Invitation.”

The vampire horror flick sucked in $2.63 million on Friday, its opening night, according to IMDB’s Box Office Mojo, and is projected to bring home $6.5 million this weekend, according to Forbes.

Based on Bram Stoker’s “Dracula,” the Sony film has received lackluster reviews, but still holds the number one spot in this summer’s lowest-grossing weekend at the box office.

“Bullet Train” screeched into second place with over $1.5 million in sales. The Brad Pitt-led action blockbuster sped up a notch from last week, where it landed in third.

“Top Gun: Maverick” flew to third place taking in $1.35 million. The Tom Cruise film, which has earned $1.35 billion in the box office since its May 27th opening, according to TV Guide, is now available to stream on Prime Video.

“Dragon Ball Super: Super Hero,” which was in first place last weekend, lost some of its superpowers this week, rolling down to fourth, with a $1.3 million take.