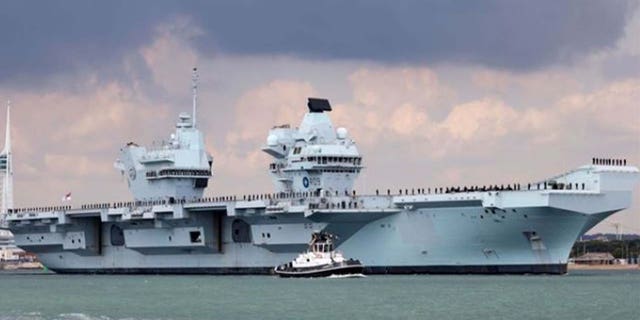 The Royal Navy aircraft carrier HMS Prince of Wales, a NATO flagship, reportedly broke down after setting sail for a four-month deployment to the United States.

As of Sunday, the $3.5 billion vessel remains anchored near the Isle of Wight while officials address a mechanical issue.

A photo of the HMS Prince of Wales anchored near harbor.
(royalnavy.mod.uk)

The HMS Prince of Wales, which was first launched in 2017, broke down shortly after setting sail from Portsmouth Saturday afternoon.

“HMS Prince of Wales remains in the South Coast Exercise Area while conducting investigations into an emerging mechanical issue,” a Royal Navy spokesperson told UK Defense Journal, which was the first to report the breakdown.

Sources told the outlet that divers were sent down to examine the issue and reported damage to the propellor shaft.

The aircraft is expected to stay anchored for a few days while it undergoes repairs. It will then resume traveling to North America where the ship’s crew will train alongside their counterparts in the U.S. and Canada.

“Taking the HMS Prince of Wales task group across the Atlantic for the rest of this year will not only push the boundaries of UK carrier operations, but will reinforce our close working relationship with our closest Ally,” Commanding Officer, Captain Richard Hewitt said in a statement.

He added: “From operating the F35 Lightnings and drones to hosting the Atlantic Future Forum, none of this would be possible without the efforts of the amazing sailors on board, many of which are on their first deployment with the Royal Navy.”

Fox News has reached out to the Royal Air Force for updates.

Previous How significant is resistance to the Taliban in Afghanistan?
Next Nawazuddin Siddiqui says film ‘Haddi’ has put him in shoes of female co-stars