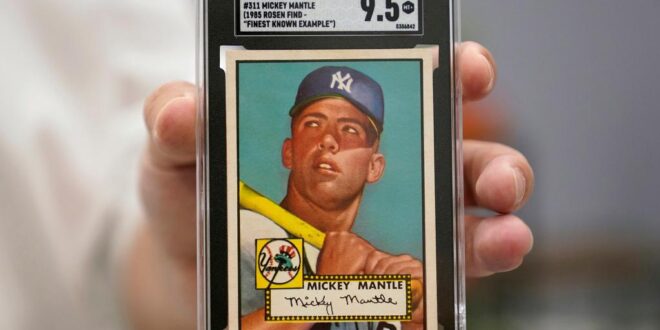 A Mickey Mantle baseball card sold for a record-smashing $12.6 million Sunday, the highest price ever paid for a piece of sports memorabilia.

The 1952 Mantle rookie card, which was in mint condition and received an astounding 9.5 grade from grader SGC, was last sold in 1991 for $50,000 by the famed baseball-card collector Alan Rosen.

In a letter to the buyer accompanying the sale, Rosen wrote that the card was “in my estimation the finest known example in the world,” noting its perfect centering and color, with only the “slightest evidence of paper toning.”

The auction house had predicted the card would fetch more than $10 million.

Chris Ivy, Heritage’s director of sports auctions, wrote in a July statement that the piece of memorabilia’s exceptional SGC grade, “plus the fact it has documented provenance from the most storied find in hobby history, puts this card in a category of its own.

“The card more than lives up to Rosen’s claim when viewed in person,” Ivy said.

Mantle, who died in 1995, was a switch-hitter with the New York Yankees for all of his 18-year career. He helped the Bronx Bombers win seven World Series titles and was a three-time American League MVP, making it to the National Baseball Hall of Fame in 1974.

The record-breaking price for the Mantle card comes amid a burning-hot market for sports collectibles, with everything from soccer jersey to sports cards scoring sky-high prices.

The previous record for the highest price paid for a baseball card was set earlier this month by a 1909 Honus Wagner card, which sold for $7.25 million in a private sale.

Just last month, the championship belt that Muhammad Ali won in his 1974 “Rumble in the Jungle” heavyweight title fight garnered almost $6.2 million at auction, and the jersey worn by Diego Maradona when he scored his infamous “Hand of God” goal at the 1986 World Cup fetched $9.3 million in May.

Ivy attributed the renewed interest in sports-memorabilia market to the pandemic.

“There’s only so much Netflix and ‘Tiger King’ people could watch,” he said, referring to the streaming service’s reality series about a convicted former zookeeper. “So, you know, they were getting back into hobbies, and clearly sports collecting was a part of that.”

In a 2018 interview with Forbes, David Yoken, founder of Collectable.com, estimated the sports collectibles market was valued at $5.4 billion.

The research firm Market Decipher said that by 2021, the market’s value had swelled to $26 billion and could soar to an eye-popping $227 billion within a decade, in part due to the popularity of NFTs, or digital assets known as non-fungible tokens.