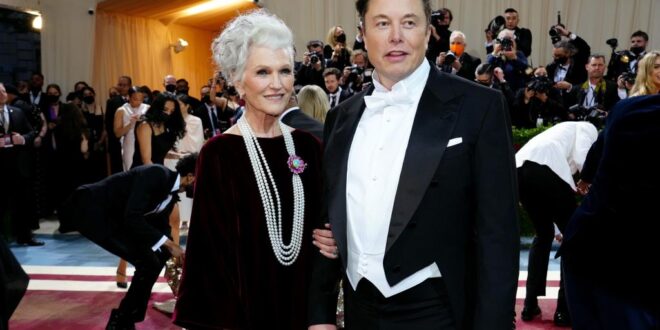 Maye Musk’s sleeping arrangements at her son Elon Musk’s house may come as a shock to some.

Despite the fact that her multi-billionaire son is the world’s richest man, the 74-year-old model said he’s not interested in possessions “at all.”

In fact, when she visits the tech magnate — who is worth a comfortable $229 billion —  in Texas, the mom-of-three revealed she has to “sleep in the garage.”

“You can’t have a fancy house near a rocket site,” she told The Times.

Back in April, Elon himself revealed he doesn’t “even own a home right now,” and stays “at friend’s places.”

Musk later tweeted that his primary residence is a rental from SpaceX, worth $50,000. What’s more, the residence is conveniently near the company’s Texas location.

Musk began unloading his real estate portfolio last summer after revealing he would give up all tangible assets to devote his life “to Mars and Earth.”

“I am selling almost all physical possessions. Will own no house,” he tweeted in May 2020.

“Don’t need the cash,” the eccentric billionaire tweeted in 2020. “Possession just weighs you down.”

But unlike her son, Maye revealed she has no interest in being blasted off to Mars.

“You have to have six months of preparation and isolation and that just doesn’t appeal to me,” she told the outlet. “But if my kids want me to do it, I will do it.”