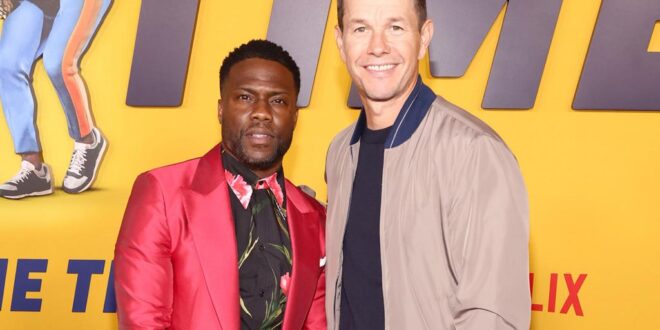 Kevin Hart pushed Mark Wahlberg into sexy nude scene: ‘He did me dirty’

Kevin Hart bamboozled Marky Mark into getting him to do his first-ever nude scene.

Mark Wahlberg, 51, stopped by “Big Boy’s Neighborhood” on Thursday and explained that he’d already agreed to star in 43-year-old Hart’s Netflix buddy comedy “Me Time” when the comedian decided to expose his bare derriere.

“He [Hart] came to me with [the movie] and John Hamberg and I said, ‘Absolutely,’” Wahlberg recalled. “But then, of course, they rewrote the part a little bit because, before my entrance, I had clothes on. Now I’m naked.”

“They had me out there in Long Beach for 12 hours, a– -out,” Wahlberg said. “I just got a pair of Travis Scott Jordans on. Got me a– naked, then he put me in Daisy Dukes.”

“I mean, he did me dirty,” added Hollywood fave Wahlberg.

Wahlberg plays Hart’s old friend in the movie — which dropped Friday on Netflix — as the two reconnect and get into some mayhem while the family of Hart’s character goes on a trip.

“But the scenes are so funny, so I’m like, you know what? I got to do the same thing. I got to be fearless as an actor and just go for it and try it,” Wahlberg told Big Boy.

In the end, Wahlberg was so OK with the nude scenes that he even sat his wife and daughter down — without context — to watch it.

“The first time I first come out a— naked, my daughter — her face was purple but laughing hysterically,” Wahlberg recalled. “I mean, she was a little embarrassed but she couldn’t stop, man.”

Earlier this month, he also revealed that his kids are “terribly embarrassed” by his fashion choices during the 1990s and his “Good Vibrations” days.

“My son, the whole time we were on summer break, doesn’t have a shirt on and has his underwear hanging out. He totally stole the whole look,” he laughed in an interview.

But what hasn’t changed since is his rock-solid bod. The famously fit workout addict is known to wake up at 2 a.m. every morning so that he can be in the gym by 3 a.m.

In 2017, Wahlberg is one of the highest-paid actors in Hollywood by Forbes, with an astonishing income of $68 million thanks to movies like “Ted,” “Planet of the Apes,” and “The Perfect Storm.”

Previous ‘House of the Dragon’ star Graham McTavish sleeps next to his giant sword
Next Mickey Mantle sold for record $12.6 million