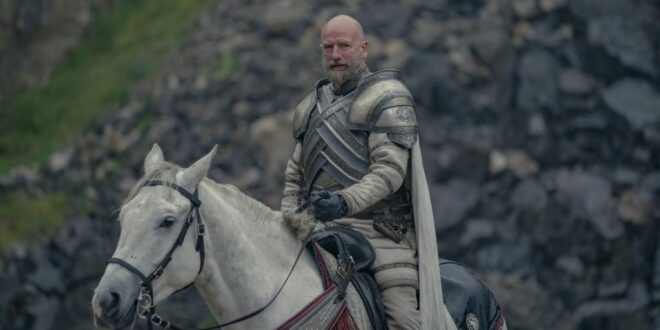 Scottish actor Graham McTavish is king of the franchises.

He’s been in hit sci-fi and fantasy adaptations (“The Hobbit,” “Outlander”), he’s entered the Marvel world (in animated form) and he’s currently in two juggernaut shows simultaneously: as Lord Commander of the Kingsguard, Ser Harrold Westerling, in the already renewed “Game of Thrones” spinoff “House of the Dragon” (Sundays at 9 p.m. on HBO) and as Sigismund Dijkstra in “The Witcher” (Netflix), currently filming Season 3.

Were your roles in these franchises a deliberate choice?

Yes, it’s a campaign of world domination. If it’s got a sword in it, and a cloak, and maybe a candle, and a horse, I’m there. I sleep with those things by my bed. Well, maybe not the horse. But I’m very in tune with my sort of fantastical self. I love those things, I’ve always been a big sci-fi and fantasy fan. Really, it’s just how it’s worked out. The last 10 to 12 years, it’s been one fantasy after another. I’m filming “The Witcher” in London at the moment. I had the bizarre experience of filming “The Witcher“ during the day, and then literally having to get changed into my outfit for the premiere for “House of the Dragon.” It was very odd. Literally shedding one character to go and talk about another.

Were you a fan of “Game of Thrones” before getting cast in “House of the Dragon?”

Oh yes, absolutely. So I was excited to be part of that world. I remember I got the news, and I was with my children at the time, they’re 10 and 15. And their first question was, “Do you get to ride a dragon?” I had to disappoint them because I didn’t. But I spent a lot of time around [dragons]. It’s a strange thing, because obviously you’re having them represented in all sorts of strange ways on set — one of which was literally a laser pen on the roof that we would look at, and that would be the dragon flying around. We use our imagination all the time when we’re acting, but in a situation like that, you have to fight against the instinct to feel a little foolish, looking at a tennis ball on the end of a stick and trying to imagine that that is a fire-breathing dragon. It was great fun, though.

When I walked into the throne room, it was just me and Milly Alcock, who plays the young Rhaenyra — and when you see that iconic Iron Throne if you’re standing there in a suit of armor with a giant sword, very little acting is required. You just immerse yourself in that world.

You were also in “The Hobbit” films. Are you planning to watch the “Lord of the Rings” TV show?

Oh yeah, I’m going to be very interested to see how it is. When you’ve been part of that Middle Earth fandom, you get a little proprietary, you want to see how that legacy is being looked after. So I think I’m not going to be alone among the cast of “The Hobbit” or “The Lord of the Rings.” We’ll all be tuning in.

What can you share about Season 3 of “The Witcher“?

I can’t share any of the plot, but I can say that I’m having a wonderful time. It is really a lovely cast. There’s a lot of laughter on that set, and Henry Cavill is a lovely guy to work with. It’s great; [my character] Sigismund Dijkstra is a cunning, manipulative individual. He has an agenda, he will not be deflected from it [and] we can expect a little more of that from him.

And there’s more of your travel docuseries “Men in Kilts” with your “Outlander” co-star Sam Heughan?

Season 2 is set in New Zealand. I spend part of my time there because that’s where my children are, so Sam [Heughan] joined me and we drove around the country from top to bottom. If you thought I was scared in Season 1, wait until you see how scared I get in Season 2. [Sam] is determined to — I don’t know, give me a heart attack, permanent PTSD, nightmares. It seems like his goal in life is to reduce me to tears as often as possible.