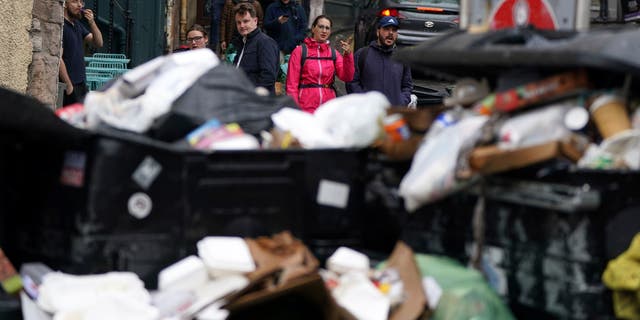 Stinking piles of garbage on the streets of Edinburgh are threatening the health and safety of the public, a health authority warned Saturday as strikes by garbage collectors in the Scottish capital moved into their ninth day.

The warning from Public Health Scotland came as garbage collectors in Newham, a borough of London, also walked out for a week over a pay dispute.

Images of food waste and diapers rotting on the streets is just adding to scenes of chaos in U.K. as industrial disputes multiply amid soaring food and energy costs. Bathers in the U.K. were warned last week to stay away from dozens of beaches as heavy rain flushed raw sewage into rivers and seas.

Public Health Scotland told local authorities that the “decontamination of public areas where bins have overflowed may be required.” It warned that “if organic waste builds up, it can become a risk to human health.”

A view of overflowing bins in the Grassmarket area of Edinburgh where cleansing workers from the City of Edinburgh Council are on the fourth day of eleven of strike action, in Scotland, Wednesday, Aug. 24, 2022.
(Andrew Milligan/PA via AP)

Garbage collectors walked out on Aug. 18 and plan to stay off work until Aug. 30. Even more strikes lay ahead if the pay dispute is not resolved.

Britain is facing a massive cost-of-living crisis, with wage increases failing to keep up with inflation, which last week stood at 10.1%. Those financial challenges have only been increased due to soaring energy costs — authorities say residents in Britain will see an 80% increase in their annual energy bills in October.

The country has seen waves of strikes this summer, with the public transport system grinding to a virtual halt on several days due to rail strikes. Primary schools and nurseries in Glasgow, Scotland’s biggest city, will be forced to close for several days next month if a strike from council workers goes ahead.

In London, garbage drivers in Newham Council began a week of walkouts on Saturday, with union officials warning there could be more. Sharon Graham, general secretary of the Unite union, said those workers were paid less than others in neighboring councils.

“The council must now focus on reaching a deal with the workers, who face a financial crisis,” Graham said. “If they don’t, then the coming days will undoubtedly mean more industrial action.”

Britain’s image has taken a battering this summer. French lawmakers in the European Parliament complained this week that the raw sewage flushed into rivers and seas by the U.K. also threatens bathing waters, fishing grounds and biodiversity in the European Union as well.