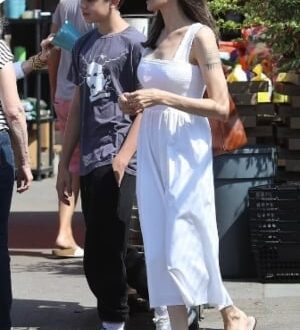 Angelina Jolie looks radiant in white as she takes to streets in L.A with son Knox

Angelina Jolie has been setting stunning summer-style goals and her latest pictures are proof of it.

The Hollywood star left fans awe-struck as she took to the streets in Los Angeles on Saturday with son Knox.

The 47-year-old Eternals star looked gorgeous as she opted for a comfy, summer-friendly look for the outing as he was spotted shopping new for plants with her 14-year-old son.

The fashion diva paired her white frock with a pair of dark-tinted aviator sunglasses. She finished off her look with a pair of white Valentino slip-on flats and left her brunette locks straight open.

Knox, on the other hand, wore a graphic print t-shirt with black sweatpants and a pair of white and grey sneakers.

The Maleficent starlet was spotted on several outings with her children recently amid the ongoing legal battles with former husband Brad Pitt.

It was recently revealed that Jolie had sued the FBI for closing an investigation account on the Fury actor.

Previous Kate Middleton wasn’t ready for shopping with children ahead of their return to school
Next Victoria Beckham hops on motorbike with husband David, ‘our Maverick moment’